Of Noir and Guitar: A Prime Mover Today I continue my contribution to The Self-Styled Siren and Ferdy on Films ambitious For the Love of Film (Noir) Film Preservation Blogathon, where all manner of terrific writers have joined to remind you of the beauty of Noir, and to fund the restoration of the underrated 1950 thriller THE SOUND OF FURY starring Lloyd Bridges. Clicking on the banner above will allow you to make your own donation to the cause. Again, even if you think you can barely help out a fellow American who's down on their luck, a single dollar or two is welcome; we've all lived through a sob story or two. Random donors will be selected for great prizes, including DVDs, original artworks, and books related to all things dark and forboding, so if anything, you might be able to stop your sobbing.

When I left off in my previous post, it was the dawn of music video, where all you needed was a girl and a gun and you had a compelling video. But as the '80's wound into the '90's, the landscape was changing. MTV was leaning on more long-form programming, the audiences at home needed more to wow them, and the record companies were spending more money in order to wow them, so it would no longer suffice to just buy some vintagewear at the thrift shop and restage CASABLANCA. Also, technology was advancing, the toolbox of tricks was expanding, and new directors realized you didn't need to tell a narrative story, you just needed to do something visually interesting. One would think under these conditions, Noir would be replaced on the playlist like Academy aperture was replaced by CinemaScope. But like a underestimated patsy who doesn't know they're supposed to be dead, Noir kept permeating the thoughts of musicians and artists alike. 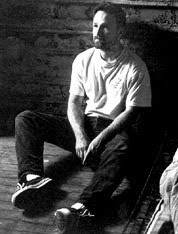 Looking over the generation of music video directors that emerged from this important transitionary period, I am definitely not alone in espousing that one who has, in his own special idiom, maintained the promise (or, in keeping with the tropes, the ruse) of Noir is David Fincher. Though never so obvious in his homage as the previously analyzed Russell Mulcahy, what he has eschewed in traditional trappings he has more than made up for in emotional roots. And before he was even entrusted with a feature, he planted those roots in the music video realm. And even there, he was able to change the rules: not one of the 3 example videos I've chosen feature a gun or a detective or any of the usual totems of the layman's understanding of Noir.

We are, however, treated to a protagonist who fears a deception only to learn he's sealed his own fate...

...two different interpretations of the physical evidence and aftermath of a lover about to lose their object of affection...
...and an icy blonde growing aware of being pursued by the one hit man no one ever escapes.


And in the shift to features, there is always some similar sort of emotional root of the classic noir in every single film of David Fincher. Consider:

The doomed, violent criminals stalked by a more violent aggressor, who innately understand even if the police arrive, it will not be to save them;

The veteran detective and the young turk who fail to contemplate the depths of one sociopath's calculations;

The rich heel who begs to know who and how many are trying to bring him to ruin and why;

The light sleeper who cannot, or does not, want to acknowledge his darkest wishes;

The working stiff who betrays his rich client in pursuit of an illusory payday; 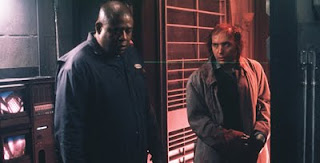 The representatives of authority who willingly take a one-way trip to Hell in a futile attempt to corner a serial killer who always has an alibi;

The man with a secret, who effectively knows when he will die, and must piece together who he is before he will lose the capacity to do so;

And the cagey manipulator, who seems to double-cross every meaningful person in his life, including himself;

For my final installment in this Blogathon, you'll meet someone just starting to bring the joy of silvery imagery to new viewers. Meanwhile, keep reading the submissions and send some simoleons through those internet tubes.
Posted by Marc Edward Heuck at 5:59 AM