Love is the Seventh Grade 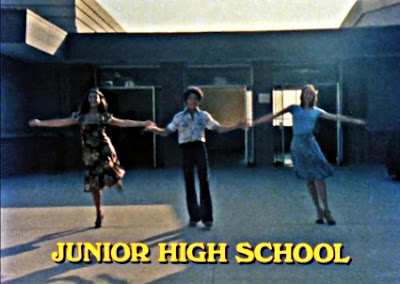 Like many aspiring directors of the ’70s, they went to the burgeoning film schools of the day –- David to USC, Michael to UCLA -– and when they had an opportunity to make a dream project, they decided to revisit that innocent time.

Unlike most beginning directors of that era, however, they staged their reverie as a musical!

With college classmates Steve Jacobson and Briana London, they created Junior High School, a song-and-dance saga about the first day of school, and one boy’s fumbling attempts to navigate strict authority figures and mean older kids, while just maybe, getting the attention of the prettiest girl in class. 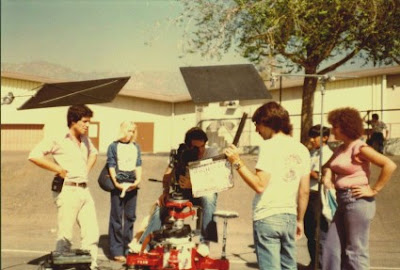 David’s application to make it during his USC classes was rejected due to its expansive scope, so Michael set it up as a senior project at UCLA, enrolling in an extra quarter of classes to get access to the film school’s lights to save production costs.

With seed money from selling a spec commercial to the L.A. Times, and donations from friends and family, they raised $35,000 to make the 40-minute low-budget short. 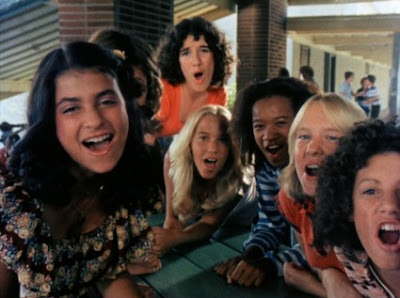 Wechter & Nankin auditioned upwards of 200 kids from greater L.A. and the San Fernando Valley, almost all non-professionals, to fill the prime roles.

The adults were played by the filmmakers’ family members and their friends, such as comedians Charlie Brill and Mitzi McCall, who had opened for The Beatles on “The Ed Sullivan Show” in 1964, and Art Ginsburg, owner of popular power-lunch destination Art’s Deli in Studio City. 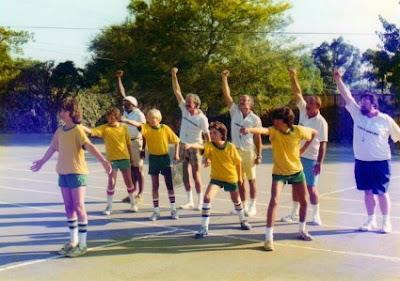 The young neophytes were incredibly well-cast. P. David Ebersole as Jerry embodied every kid who ever felt invisible, or worse, all too visible at the wrong time, but could sparkle like a gem when good fortune came around.

Karen Capelle as Lori was the kind-hearted blonde-tressed dream girl so many boys imagined their first crush to be. 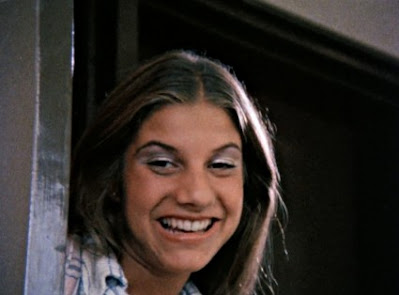 Toni Mazarin as Vicki inhabited her manipulative mean girl with relish; she’s a mistake any boy could make, and even look back upon with fondness. In a video recollection included on the Blu-Ray, Ebersole revealed that during filming, he was more attracted to Toni than Karen.

Even the supporting characters left an impression on audiences.

Who could forget Mikal Robert Taylor as nasty nerd Keith, wielding his brain and briefcase for evil, likely destined to grow up and become a GamerGater?

Or Jan Russell as the perpetually fuming, unnamed leader of “The Itty Bitty Titty Committee”? 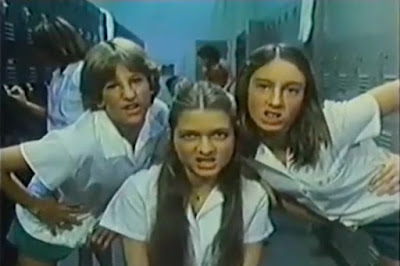 Of course, the featured player with the most impact was Paula Abdul as Sherry, whose Friday night party puts the plot in motion.

She didn’t yet have the polished singing voice that took her to the Top 40 in the ’80s, but she was already doing leaps, landings, and twirls in five-inch platform wedgies, so her dance skills were already in effect. 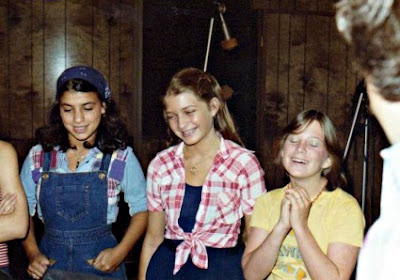 Paula Abdul (left) and some of the girls in the studio, recording a track for Junior High School; photo courtesy of Steve Jacobson

David Wechter composed the libretto of songs himself, using some compositions he’d written during his own adolescence. The score and song arrangements were done by David’s father Julius Wechter, a frequent collaborator with Herb Alpert who founded the Baja Marimba band.

Julius enlisted top session musicians, including Tommy Tedesco of The Wrecking Crew, to perform on the soundtrack, as well as Phil Spector’s “Wall of Sound” technician Larry Levine to engineer the recordings. 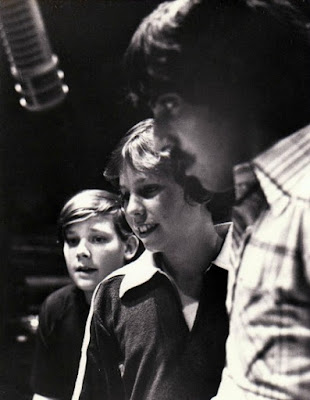 While the musicianship was professional, the filmmakers wanted to make sure the kids sounded untrained.

Roger Ebert saw it at the USA Festival in Dallas, and later programmed it into a curated block at the Toronto Film Festival that same year, proclaiming, “The movie remembers the funny and the painful aspects of [puberty]…a completely winning, sunny, and wickedly funny experience…”

Herb Alpert wrote a letter of congratulation to Wechter after seeing it. 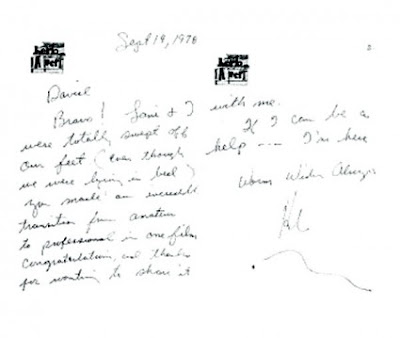 “Bravo! Lani [Hall] and I were totally swept off our feet (even though we were lying in bed). You made an incredible transition from amateur to professional in one film. Congratulations, and thanks for wanting to share it with me.”

The rave reviews drew the attention of the Walt Disney company, who agreed to produce a feature film debut for the duo, who were still not even old enough to rent a car. Their 1980 film, Midnight Madness, depicted a wild all-night scavenger hunt in Los Angeles.

While it did not feature any of the kids from Junior High School, it did provide an auspicious film debut for another talented kid, Michael J. Fox. It also involved another heelish nebbish character, played by dependable movie nerd Eddie Deezen. 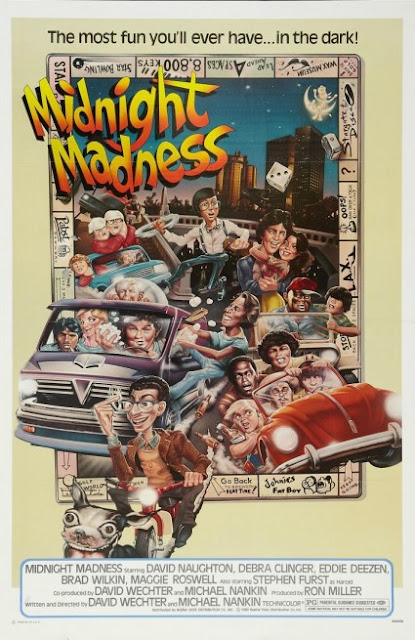 Midnight Madness was the second Disney production to get a PG rating after The Black Hole, and the first time the studio removed their name from the credits, due to what was deemed racy material.

While it was not initially a hit film, inspired fans created their own versions of the sprawling hunt as yearly events, and it is now recognized as a cornerstone film of game and geek culture.

Wechter & Nankin would attempt to develop a feature-film version of Junior High School with Footloose producer Craig Zadan, but the project fell through, and the team went their separate ways.

After some initial airings on cable, their musical faded out of circulation, occasionally resurfacing in kids’ film series and school screenings. 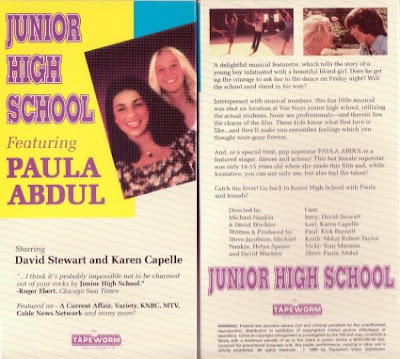 The movie received a belated VHS release in 1990, with supporting player Paula Abdul given top billing on the cover to entice fans of hers unaware of this early performance.

Abdul’s management reacted with surprising hostility, which drew the attention of the tabloid press, including this segment from “A Current Affair.”

The foursome responsible for Junior High School are all still very active in entertainment today. David Wechter shared initial story credit with Bruce Kimmel on the 1998 Robert Rodriguez thriller The Faculty, and has been a producer and director on many reality TV programs, most notably “Penn & Teller: Bullshit.”

Michael Nankin wrote the 1987 teen horror classic The Gate, and is a producer and director on many fantasy and action TV shows, including the newly-revived “The Exorcist” series.

Steve Jacobson worked in on-air promotion for NBC and CBS, and more recently has been a story producer on one of David Wechter’s programs, “Cowboy U.” 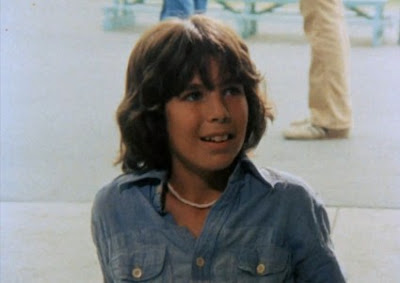 While most of the kids from Junior High School soon went back to civilian lives, star P. David Ebersole has been associated with a diverse body of projects.

With his husband and producing partner Todd Hughes, he directed Hit So Hard, a 2011 documentary on former Hole drummer Patty Schemel, and together they were executive producers on Room 237, Rodney Ascher’s speculative documentary on Kubrick’s The Shining. 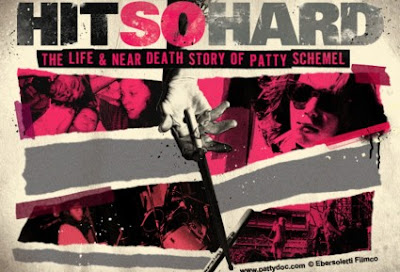 In an odd convergence, Patty Schemel played a drummer in But I’m a Cheerleader director Jamie Babbit’s 2007 comedy Itty Bitty Titty Committee. However, despite the connection to Ebersole, this was not in homage to Junior High School.

In interviews during the film’s release, Babbit credited Guinevere Turner for coining the title, and Turner later expounded, “It’s just a thing that girls said in middle school to taunt those as yet unendowed!”

In a way, this proves that Junior High School recognized some catch phrases, as well as experiences, are inherently universal for all teens. 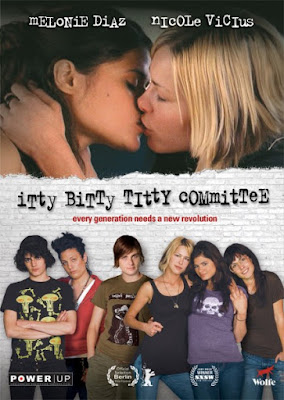 Nobody wants to relive the anxiety of homework, bullies, and bad choices that pepper many of our pre-teen years, but watching Junior High School will definitely bring back all the happier moments from those hormone-driven awkward middle-school days, and it will probably make you feel that same kind of guileless rush once again regardless of your age! Watch this short feature right now — and be sure to check out this candid conversation with David Wechter & Michael Nankin who give us a behind-the-scenes director’s commentary about the production and casting of this gem — on Night Flight Plus! 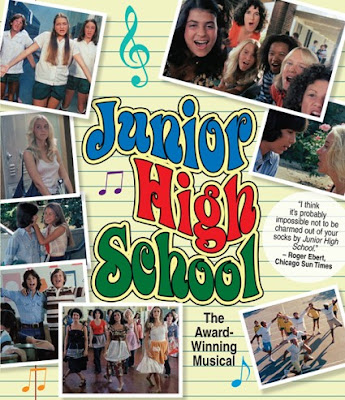