For the Love of Film...For a Rocker 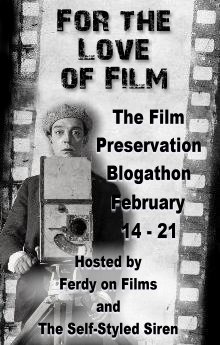 I am happily adding my voice to the noble blogathon begun by Farran Nehmes (The Self-Styled Siren) and Marilyn Ferdinand (Ferdy on Films) as a spotlight and fundraiser for the National Film Preservation Foundation. A non-profit organization created by the U.S. Congress, the NFPF raises money, awards grants, and organizes cooperative projects that enable archives, libraries, museums, historical societies, and universities to work together to save American films. The types of motion pictures most at-risk are documentaries, silent-era films, avant-garde works, ethnic films, newsreels, home movies, and independent works. These are not Hollywood sound features belonging to the film studios, but 'orphans' that fall outside the scope of commercial preservation programs and exist as one-of-a-kind copies in archives, libraries, museums, and historical societies.
I feel a keen kinship with this operation, as much of my free time and behind-the-scenes work is devoted to the search and rescue of films that don't have the protection of a big Hollywood studio. Not quite the "orphans" the NFPF champions...more kind of like the "unloved children" of neglectful parents. For over half a decade, I have freelanced for multiple independent DVD labels in the preparation of dozens of exploitation and genre films for the home video market. From courting copyright holders, locating source prints, coaxing reluctant filmmakers and talent to speak on the record, getting word-of-mouth around on the release, and finally, trying to get the damned things seen by an unfamiliar public, I've done all of these tasks and more. Moreover, I've done this for little-to-no pay, great private expense, and amazingly enough, enormous abuse from the people who purport to be the fans of these films.
But that rant will be for another day. This will be about one instance where all the migraines were worth it. 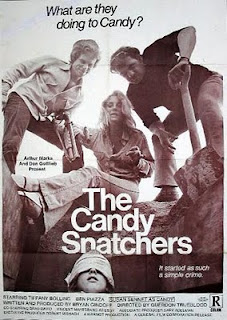 In 2004, I was lucky enough to be entrusted to work on special features for the infamous 1973 kidnap thriller THE CANDY SNATCHERS, a film that until then had all but vanished into a fog of complicated rights and silent participants. It was so obscure even exploitation completist Mr. Tarantino admitted to me he had not seen the film until after the DVD came out! Through heartfelt appeals and some prayers, I had coaxed actresses Tiffany Bolling and Susan Sennett to participate and tell their stories of the production for posterity. The DVD received great reviews and I'm still proud of my role in making it happen. Especially because of what happened long after the attention subsided.

One person I would sadly be unable to speak to was co-star Phyllis Major, who had died only a couple years after THE CANDY SNATCHERS was released. 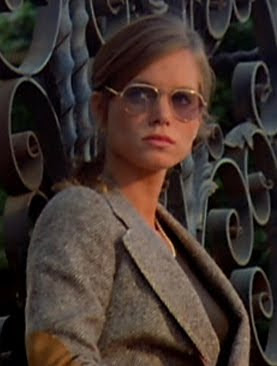 Major was somewhat known as a model, but better remembered as the beloved girlfriend and wife of singer/songwriter Jackson Browne, who wrote both lightheartedly about their courtship and heartbreakingly about her untimely death. While Major is not given much to do in this film besides be pretty and fashionably dressed and listen to the grand plans of her boss, she's a radiant presence and unforgettable, and one could have easily seen her having a respectable career in movies if she so chose. A unique bit of irony is that Susan Sennett is the longtime wife of Graham Nash, and at the time of filming Tiffany Bolling had been involved with Stephen Stills, so here is a movie that has cast the girlfriends of three seminal "California sound" artists who were frequent collaborators. However, the women were not aware of that status during filming - Major's scenes were shot separately from Bolling and Sennett, the latter two women did not know each other socially despite having boyfriends in the same band, and due to the antagonistic nature of their characters, were not inclined to hang out between takes.

Two years after the release of the DVD, I was working an event tied in to Henriette Mantel and Steve Skrovan's film documentary on Ralph Nader, AN UNREASONABLE MAN, and there were a fair number of luminaries in attendance. And a friend tipped me off that one of the famous names who was there was Jackson Browne. And after a moment of processing that, something kicked in. Between the film's obscurity through the decades, the small profile of the company, and other factors, I was pretty sure Browne did not own a copy of it. With no guarantee that I would intercept and/or get to talk to the man, I bought one from a nearby DVD vendor, and waited.

Browne stepped out 3/4 through the movie to take a phone call, and during that time Nader showed up to prepare for his Q&A alongside the filmmakers, so after the call finished they greeted each other and chatted a long time. And other banal instances called me away from the floor, threatening my chances. But finally, I had an opportunity to speak to Browne, and as briefly as I could, explained my circumstance and gave him the DVD. He was intrigued, he didn't even know the movie existed. Telling him a little more, including how Tiffany was seeing Stills during the making and that Nash's wife Susan played the kidnap victim, he seemed to recall that Susan had once mentioned being in a movie with Phyllis, but no specific detail; I in turn theorized that Susan likely didn't say much else about the film because of the ordeal she suffered during the production, and because Phyllis did not share any scenes with her or with Tiffany. Clearly for Browne, this was the equivalent of finding a shoebox full of pictures previously not known to exist. I got the impression he was thankful to receive the DVD.

About another year or so later, while puttering around MySpace (and by the way, you can still find me there), I happened to find Phyllis and Jackson's son Ethan. After a little Q & A to determine if we were both for real, he was quite excited to learn about the film's availability. It was an even bigger discovery for him, because having lost his mother when he was only two, he had only photographs to know her with, and never seen any footage of her or heard her voice. He has gone on to purchase multiple copies of the DVD, and we have stayed in sporadic contact ever since.

Thinking about these moments and how they've unfolded fascinates me, especially in the context of supernatural ideas. It is staggering to even fathom that little me, who grew up in suburban Cincinnati and had "Running On Empty" as his favorite song for a couple weeks in the summer of '78, could years later be the person who puts unseen footage of that artist's muse into his hands. Is God that much of a labyrinthine chessmaster? Or is it not planned that far in advance, maybe that other Rube Goldbergian events must take place to determine that the time and messenger is correct? Or for the non-cosmic, just plain dumb luck? In any case, I honestly do think this was more than just giving a trinket to somebody famous. Ethan Browne has expressed his thanks to me for being such a tireless supporter of the movie. I still don't know if Jackson Browne has watched the movie, or if he ever will. But I bet he likes having that option now.

This is a big part of what motivates me about film preservation. It's not just about keeping a movie available to people to buy, or to make it look as good today as it did when it opened, or to generate new income for the folks who gambled on making it years ago. There's an old George Carlin joke: "Do you ever look at the crowds in old movies and wonder if they're dead yet?" Statistics say that many of them probably are. But their relatives are grateful to have that instant of their lives available to look at again over future generations. Films are not created in a vacuum, and even with CGI characters, somebody still has to model for the motion capture. There are hundreds of lives and stories tied into even the schlockiest of works, and to preserve the movie is to preserve the people.

Every film can capture something in its frames and make it valuable and worth saving, even if it's just the gaze of a pretty girl. And in this specific instance, I helped give that back to the people who needed it most.


The National Film Preservation Foundation is the independent, nonprofit organization created by the U.S. Congress to help save America’s film heritage. They work directly with archives to rescue endangered films that will not survive without public support.

The NFPF will give away 4 DVD sets as thank-you gifts to blogathon donors chosen in a random drawing: Treasures III: Social Issues in American Film, 1900-1934 and Treasures IV: American Avant Garde Film, 1947-1986.

TO MAKE A DONATION TO THE NFPF CLICK HERE