Look What They Done to Our Gals, Ma

The 1972 murder mystery What Have You Done To Solange?, part of a wave of stylish and memorable foreign-made horror films during the ‘70s, has recently been added to Night Flight Plus’ selection of titles from the Arrow Films library.

After serving as cameraman to Sergio Leone on his breakout hits A Fistful of Dollars and For a Few Dollars More, Massimo Dallamano struck out on his own as a writer/director, building a reputation for sex-tinged thrillers, such as the very mod Dorian Gray with Helmut Burger. 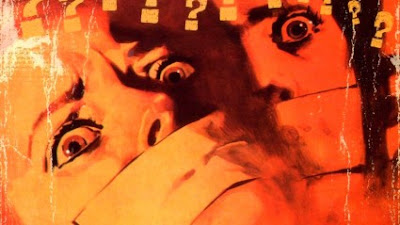 Around this time, two very popular styles of murder mysteries had emerged in the European film scene.

Italy had fostered the “giallo,” a catch-all term for lurid thrillers involving elaborate killings and sex derived from the Italian word for “yellow,” the standard color of the paperback covers such pulp fiction was printed on. 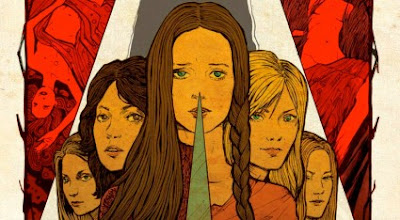 These two movements were joined in gory harmony when Italian and German producers joined forces with Dallamano in 1972 to create his most well-received and enduring film, What Have You Done to Solange?

A married teacher at a London girls’ college, brazenly carrying on an affair with one of his pupils, becomes the first of many possible suspects when an insular clique of popular chicks are killed off in particularly nasty fashion, and launches his own investigation to clear his name.

We’re not going to tell you much more about the story, suffice to say the terrain of kink and degradation that follows makes it abundantly clear that Solange is not a movie you could remake today.

Solange stars handsome Fabio Testi as Henry, the teacher-turned-detective. He drew worldwide attention in Vittorio De Sica’s Oscar-winning Italian film The Garden of the Finzi-Continis, and would become a favorite of Two-Lane Blacktop director Monte Hellman, appearing in three of his films. 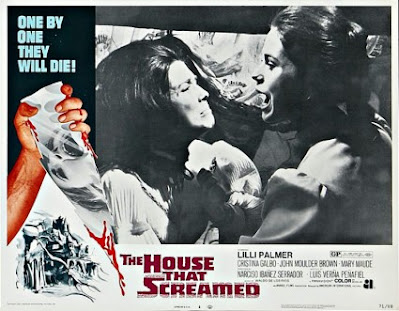 Christina Galbo, who plays his student mistress Elizabeth, was previously in another classic perversion-and-murder-in-a-girls-school thriller, Narciso Ibanez Serrador’s The House that Screamed, which recently received an excellent BluRay release from Scream Factory, and has been praised by Guillermo Del Toro as “a powerful, transgressive retelling of the Frankenstein myth.” 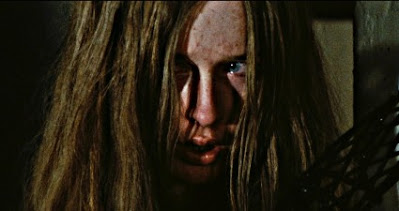 Although she does not appear on screen for almost an hour, Camille Keaton makes her memorable film debut as the mute, ethereal Solange herself.

Keaton would later become immortal for playing an assault victim turned vigilante in I Spit on Your Grave, and recently reprised the character for an official sequel.

All of the onscreen nastiness is staged with a gorgeous score by Ennio Morricone, featuring operatic soloing by Edda D’Orso, who previously provided the arias for “Jill’s Theme” in Sergio Leone’s Once Upon a Time in the West.

In America, Solange was acquired by genre specialists Hallmark Releasing, who created the legendary “IT’S ONLY A MOVIE” campaign for Last House on the Left, and they released it under different titles for years.

The best known alternate moniker was The School that Couldn’t Scream, which was used in 1977 to suggest it was a spiritual cousin to the Southern horror hit The Town that Dreaded Sundown – the advertising even claimed that, like Sundown, it was based on a true story (it wasn’t), and that it made the bigger film “look like a puppet show!” 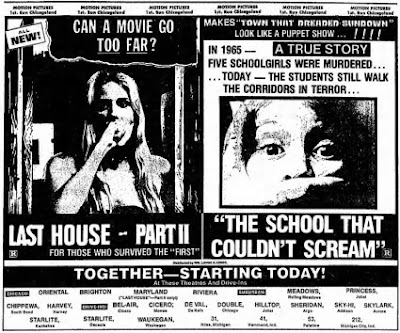 Exploitation historian Chris Poggiali has documented all the other names Solange hid under in this post at his Temple of Schlock blog. We’re particularly amused at how they tried to make it look like a cheerleader comedy under the name Rah Rah Girls!

Two years after the release of Solange, Dallamano directed and co-wrote What Have They Done to Your Daughters?, which was not a direct sequel to the earlier film, but did continue the concept of young girls murdered amidst sleazy behavior with authority figures. 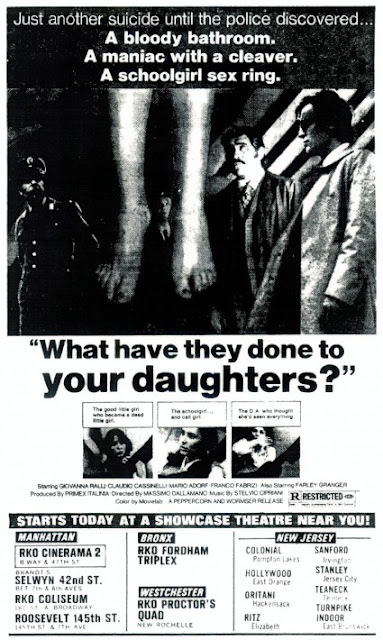 This outing blended giallo stylings with another emerging Italian subgenre, the “poliziotteschi”, or “police action” drama, modeled on American hits like Dirty Harry and Bullitt, that offered car chases and cynical politics alongside the slayings.

The handy website The Giallo Files likens this entry to a “Law & Order: Special Victims Unit” episode, and indeed, it’s quite interesting to see how salacious stories like this, once the domain of drive-ins and fleapit cinemas, are now fodder for a respected and long-running TV series. 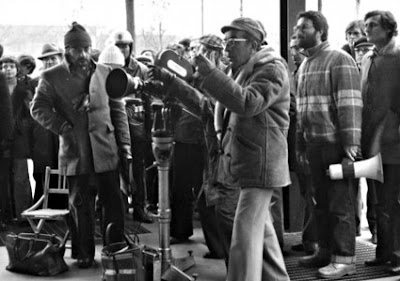 Dallamano had co-scripted and planned to direct a third installment in what was now unofficially called the “Schoolgirls in Peril” trilogy, but the 59-year old filmmaker died in a car accident in November 1976 before he could begin production on it.

The story went through more writers, and with Alberto Negrin taking over direction, Enigma Rosso aka Red Rings of Fear was completed and released in 1978.

Solange star Fabio Testi returned, this time as a police inspector who, in looking into a co-ed’s very brutal demise, discovers a group of “mean girls” at her school up to most unsanctioned extracurricular activities, that make them the next targets of the killer.

To the best of our knowledge, it’s the only movie we’ve seen where a cop dramatically describes the size of the murderer’s…weapon…to shake school authorities out of their complacency.

The film has been announced for BluRay release later this year from Scorpion Releasing. 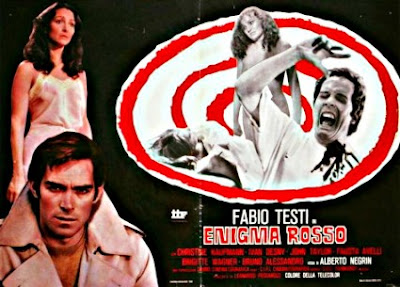 Arrow Films now offers the original Solange in a beautiful restored transfer available for streaming at Night Flight Plus.

After you watch it, we encourage you to purchase their Blu/DVD combo edition that includes bonus features, such as interviews with surviving cast members, and an even more thorough history of the “Schoolgirls in Peril” trilogy by horror historian Michael Mackenzie.

For many of us, a great weekend night was watching a scary movie and a helping of “Night Flight.” Now, you can have both in one sitting, anytime you like!

However, beware of secret teen girl squads and black gloves!

What Have You Done To Solange? — along with other selected titles from the Arrow Films library — are now available for instant viewing at Night Flight Plus. 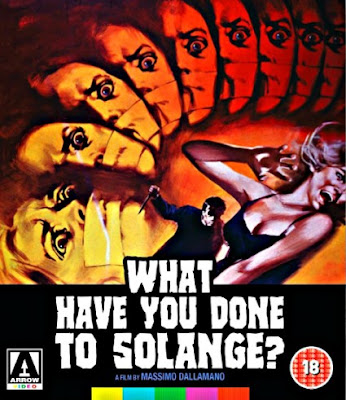