Of Noir and Guitar: Origins

Last year, I was privileged to take part in a noble blogathon begun by Farran Nehmes (The Self-Styled Siren) and Marilyn Ferdinand (Ferdy on Films) as a spotlight and fundraiser for the National Film Preservation Foundation. My submission drew lots of praise and is still one of the most-read articles here. Well, they're at it again, with a special focus on Film Noir and a special target for their fundraising: the restoration of an endangered 1950 thriller THE SOUND OF FURY starring Lloyd Bridges. Clicking on the banner above will allow you to make your own donation to the cause. Any dollar amount is welcome - if you've got $10 for a movie or a pay-per-view download, put it off for a night or so and invest it here. Random donors will be selected for great prizes, including DVDs, original artworks, and books related to all things dark and forboding, so you may see your investment pay back in entertainment as well.

To be honest with all the good and soft-boiled-souls reading this blog, I'm not the brightest bulb in the streetlamp when it comes to the subject of classic Noir. I've seen plenty of them, and love to devour them, but there are literally hundreds of writers participating in this event that can be more elegant or punchier in selling you on their seamy goodness. What I am better at, I think, is shining my dim light on their influence in places you would not normally consider. And for this entry, and a couple more to follow, I've chosen a medium that has more in common with the classic noir than initially thought. A medium that, like the low-budgeted and non-star-driven noirs of old, was dismissed by many for years as nothing more than disposable, derivative time filler: the music video.

It is probably hard to consider the music video carrying any kind of respect in the modern day. Even the network that made them famous rarely plays any. What few are made anymore are usually expensive vehicles that are more testaments to performer ego than storytelling. There are still plenty of others that are creative and unique enough to merit passing on to friends and posting on social networking sites, but it is safe to say that they are ultimately swept up amidst the salad of piano-playing cats, news bloopers, vanity webcam testimonials, and all else that constitute the daily memeage in our online diversions. And they definitely are not as effective in their first and foremost directive: to get the song played on radio and purchased by fans. But as stated by Girl On Film at the Images of Heaven blog, "[Given] how bloated and self-important music videos have become in the past 15 years or so, there’s something refreshing about revisiting a clip from 30 years back, when rock bands were loosely corralled before 16mm cameras to half-heartedly mime along with one of their 3-minute songs. The results of these brief, unpolished sessions were often crude little gems that captured more spark and natural charisma than any big-budget video produced today."

And in keeping with the theme of film preservation, many of these groundbreaking works are not being well-preserved. I saw a compilation DVD of Michael Jackson videos a couple years back and "Thriller," once the most expensive video ever made, shot in 35mm by John Landis and even exhibited in theatres, looked like it had been sourced from an old 3/4" tape! While most arguably famous artists have had their videos remastered from original film and tape sources and posted on the web by their record companies, many others surface only from fans' old home recordings...and, ironically, often get yanked from YouTube by the very record companies that have failed to preserve them! Reportedly, when WB wanted to include the two-part promotional video for Cyndi Lauper's "Goonies R Good Enough" for a DVD release of THE GOONIES, Sony Music only had the first half in their archive; a collector had to provide the concluding segment. While not often as prestigious or of august artistic value as a classic Noir, this still is a part of our cinematic history that deserves better protection that what it is being offered by those charged with its custody. 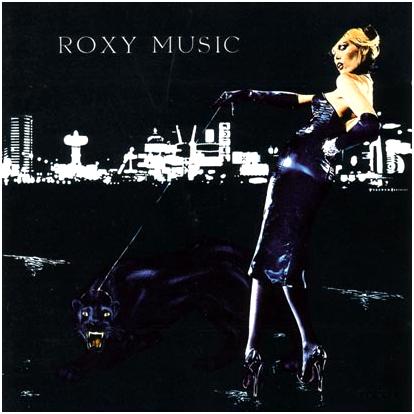 While many of the nascent directors at the dawn of music videos were taking their cues from an obvious source - the grandiose movie musical full of extras and spectacle - just as many, if not more, were taking their cues from Film Noir. Whether they were experienced filmmakers like Roger Corman protegee Jonathan Kaplan, whose Hitchcock-influenced video for "Infatuation" by Rod Stewart features MURDER MY SWEET co-star Mike Mazurki, or rising talents like Steve Barron, who made a matryoshka-style tribute in his video for "Don't You Want Me" by The Human League, they seemed to know that this was a chance to indulge in a style that was not often in demand for studio features. Bands themselves were just as inspired: the New Romantic movement of the early '80's popularized by Roxy Music and Duran Duran emphasized head-turning glamour to provide contrast to the no-frills bluntness of punk, and reveled in Noir imagery and themes. It is safe to say that the tropes of many a beloved Noir - B&W photography, smoke, rain, romantic obsession, criminal tendencies, and nihilistic endings - were the same tropes in music video that became so commonplace as to seem parodic.

And of the directors who made a name for themselves in this period, and used those tropes time and again, easily the most prominent Noir champion was Australian director Russell Mulcahy, lovingly described by Quentin Tarantino as "the poor man's Ridley Scott," an apt metaphor considering that Scott's '80's output (BLADE RUNNER, SOMEONE TO WATCH OVER ME, BLACK RAIN) has been considered among the vanguard of what constitutes modern Noir. In a recent interview, he laid out the basis of his attraction to the art form, stating, "[The] older noir films definitely had a quirkiness to the them and a black humour, but they also had a serious, strange, underlying tone to them..." And time and again, Mulcahy drew out those elements, in varying ways.

It could depict feelings of unexplainable persecution, as in one of many clips for Ultravox...

...or of solitude and isolation, as in this starmaking clip for The Motels and their lead singer Martha Davis...

...or even darker ideas, such as getting inside the mind of a stalker with violent fantasies.

It's an aesthetic that Mulcahy would carry into his feature filmmaking career. While he has worked in genres like science-fiction and historical epic, it is definitely the Noir that is his favorite. His most famous film, HIGHLANDER, is ostensibly a sword and sorcery action film, but spends much time in the dark alleys and fog of the big city. 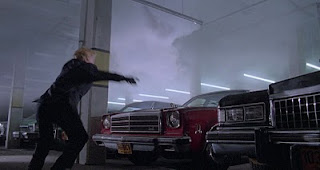 His underrated adaptation of radio and comic book hero THE SHADOW reveled in the period accoutrements. 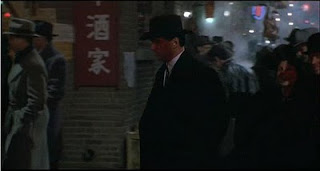 His most recent film, GIVE 'EM HELL, MALONE, takes a more meta-whimsical approach, placing the trappings of Noir in an otherwise present-day setting.

One could look at his style and snarkily say he's just blowing smoke up the viewer's ass, but nobody blows that smoke quite like him, and that's what makes him such an entertaining quantity to me and a laudable keeper of the flame.

In posts to come, I'll look at the work of an even better-known, Academy Award-level director with a Noir influence, and an up-and-coming champion bringing their love to the next generation. Meanwhile, visit Farran and Ferdy's blogs and read the other outstanding submissions to the Blogathan. And donate, so that our children will know the pleasure of villains and vixens!
Posted by Marc Edward Heuck at 6:32 AM