Now available for streaming on Night Flight Plus is the influential 1977 Fantastic Animation Festival, the first widely-released collection of animated films, which became a hit with midnight movie lovers, was the first exposure for dozens of respected animators, and spawned like-minded follow-up compilations for decades to follow. It premiered on television as one of the earliest episodes of “Night Flight” in July 1981. 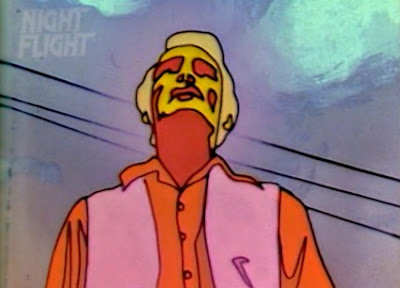 For many years, it was difficult for ordinary moviegoers to see any kind of animated short subjects beyond the big studios’ franchise cartoons.

Occasionally, one of the majors would get behind something unique – Columbia Pictures released the Mel Brooks-voiced The Critic in 1963 – but most of the time, you had to go to a museum or other artsy venue to see avant-garde animation, or hope to catch one as filler between shows on a PBS station.

In 1976, programmers Chris Padilla and Dean Berko put together an assortment of shorts at the Laguna Moulton Playhouse in Laguna Beach, California, which sold out multiple shows and drew almost 30,000 people during its run.

An L.A. distributor took note of this success, and proposed that they create a version to play nationwide.

Fantastic Animation Festival, containing sixteen shorts from their event, opened in theaters in 1977 and set records. As Padilla recounted to Variety in 1997, “[It] earned over $300,000 in its first two weeks in sixteen theaters in New York. It had its premiere the same day that Star Wars opened.”

The festival quickly found a following with the “head shop” contingent. Rockers, stoners, and other types who rarely set foot in high culture confines could now go out and see the mind-blowing sights they normally sought from concerts and laser shows…likely with some pre-show “enhancements” consumed in the car beforehand.

Even the ads indicated this was a trip-out event, with an ELO-style spaceship painted in colors reminiscent of blacklight posters from Spencer Gifts. 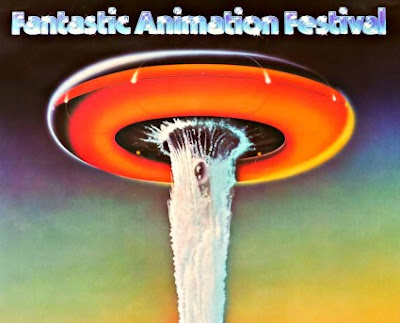 Horror writer and historian Tom Weaver, who had worked at sub-distributor Films Inc. once remarked, “We had six or eight prints just in the New York office…and we couldn’t keep ‘em on the shelves.”

This collection did for animation what Lenny Kaye’s Nuggets compilation album did for ’60s music: elevated several artists to world awareness.

The biggest star to rise from the fest is surely clay animation pioneer Will Vinton whose cautionary environmental reverie “Mountain Music” and Academy Award-winning short with Bob Gardiner “Closed Mondays” were standouts. 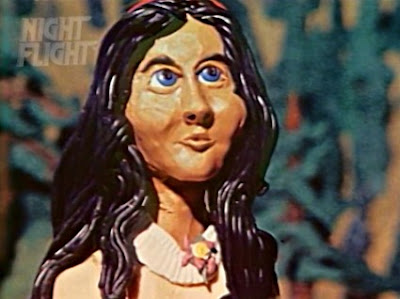 Due to contractual licensing, “Closed Mondays” was not included in the “Night Flight” broadcast, so you can watch it right here as an appetizer.

Another name that took off after their inclusion here is Steven Lisberger, who created the romantic and trippy “Cosmic Cartoon” with Eric Ladd, and went on to make history by directing Tron in 1982. 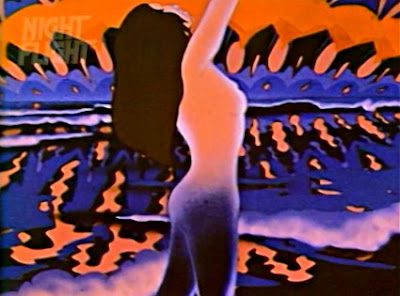 There are also some lesser-appreciated filmmakers in this assembly that we’d like to salute.

Ian Emes’ “French Windows,” scored to Pink Floyd’s bass-thumping “One of These Days,” opens this program with a bang. The contrast of orderly, geometric shapes and patterns with fluid, exuberant rotoscoped images of live dancers suggests the paradox of art, the goal of perfection against the human inconsistencies that make each creation special. 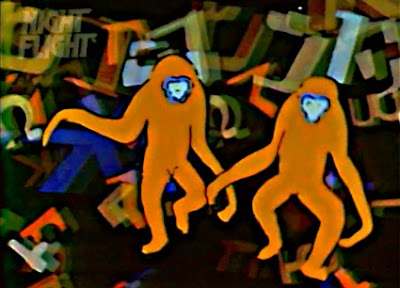 Pink Floyd were so impressed by Emes’ film, they played it at their shows, and he was commissioned to create more material to be projected in their concerts, such as this prelude for “Time.”

After creating more art and animation for other musicians like Roger Daltrey and Mike Oldfield, Emes switched to live-action directing, helming the youth music drama Knights & Emeralds, an episode of “The Comic Strip presents” featuring multiple alumni from “The Young Ones,” and the too-hot-for-TV Duran Duran music video, “The Chauffeur.”

Mihail Badica was the first Romanian animator to work in stop-motion, in a more surreal and fanciful style than his fest-mate Will Vinton.

His short “Icar” (or “Icarus”) is a funny but thoughtful observation on how evolution and discovery depends on one soul not settling for the status quo and willing to be ridiculed as they try for what seems to be impossible. 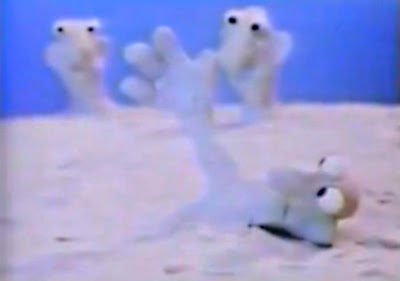 After years of making shorts under the close scrutiny of the often repressive Romanian government, Badica defected to Denmark in 1985, where he works and teaches today.

He recently did the animation for director Helene Kjeldsen’s 2015 short The Outing, featuring music by Nick Cave.

As you’re watching, if you think that we left in an ad break by mistake, you’re wrong: a pair of acclaimed commercials are showcased in this collection as well.

The spot won multiple awards, including a Clio, in 1972. 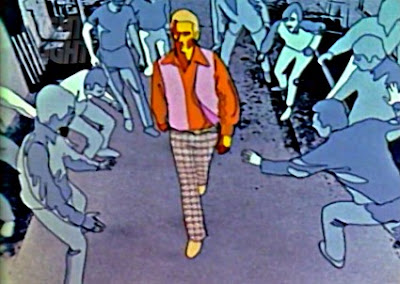 Lynda would later have the weird distinction of contributing animation to three sketch comedy movies of the ’70s, all centered around the subject of TV: The Groove Tube, The Firesign Theatre’s Cracking Up, and perennial "Night Flight" favorite, Tunnel Vision!

That’s followed by “Uncola,” an equally groovy 7Up spot with smiling moons, butterfly girls, and hundreds of bubbles, for thirty seconds of eyeball high!

The computer effects came from visual effects forefathers Robert Abel and Associates in a process called “candy-apple neon,” which was later employed in fest-mate Steven Lisberger’s Tron to give that gleaming look to computerized Jeff Bridges. 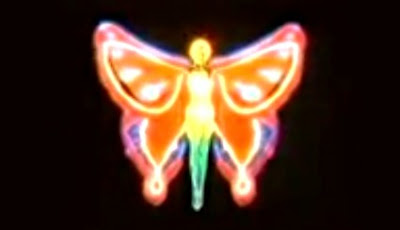 “Night Flight” was less than a month old when they premiered Fantastic Animation Festival on TV in July 1981. Listen to the commercial bumpers and you’ll notice it’s not Pat Prescott doing the announcing!

As mentioned earlier, not all the shorts that played in the theatrical version were able to be included in the “Night Flight” airing, so, to make up for it, the producers added a bonus short, which we think is really super, man. 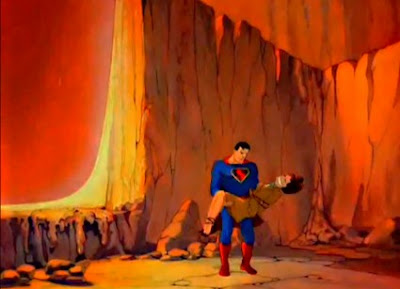 Literally, it’s the first Superman cartoon by Max & Dave Fleischer, complete with a brief origin of the Last Son of Krypton’s arrival to Earth, and a mad scientist supervillain with an evil bird and a death ray at his disposal. 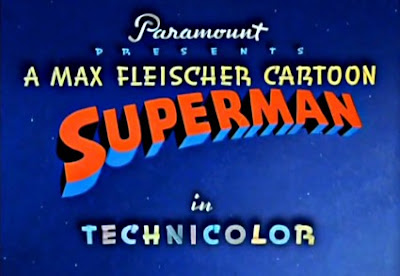 The national success of Fantastic Animation Festival led to many spin-offs.

Rock band promoters Craig “Spike” Decker and Mike Gribble, who helped circulate flyers for the original Laguna Beach event, soon launched their own touring shows, most famously Spike & Mike’s Sick And Twisted Festival of Animation, which, despite the death of co-founder Gribble, continues to this day. 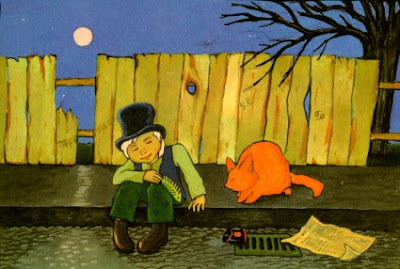 And the International Animated Film Association partnered with Landmark Theaters in the late ’70s to release their annual “International Tournee of Animation” shows to adventurous venues for two decades.

Today, you can find animated shorts on cable, on the internet, and in theaters on a regular basis, and we think you can thank some bold artists and a couple brash Californians for stoking that appetite. 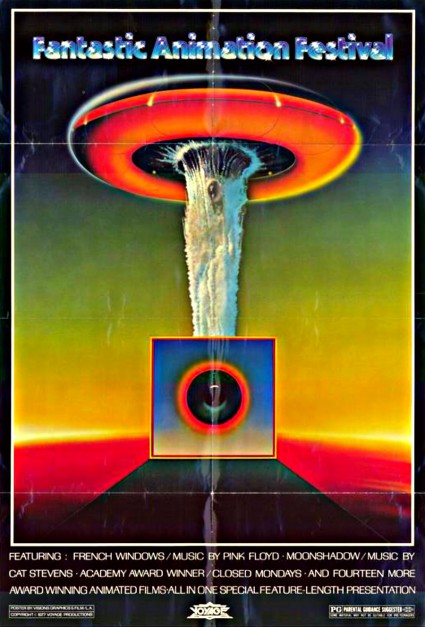