Sad Song on the Fourble Board

This past Tuesday, I performed two otherwise completely unrelated activities. I bought a CD of a legendary rock album, and I listened to a classic episode of an old time radio scary story. And in the middle of the night, I pondered on the spiritual link between them... 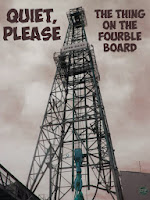 Most recently brought to light by a tweet from Patton Oswalt, "The Thing on the Fourble Board" from the series QUIET PLEASE is ranked alongside Orson Welles' adaptation of "The War of the Worlds," the "Sorry, Wrong Number" episode of SUSPENSE, and the "Chicken Heart" episode of LIGHTS OUT as one of the scariest, creepiest radio broadcasts ever performed. And after taking a listen to it at, oh, around 2:37 a.m. after a tumbler of Old Crow, I too was finding myself rattled by ordinary house noises as I attempted to go to sleep soon after. Like many who discover the tale, I'm loath to go into details until the reader/listener themselves have had a chance to experience it themselves. So set the reading aside for a half hour and listen to this, okay? I'll wait.


(or, if you'd rather listen on a uZuny or whatever device, you can download here)

Did you listen? Good. Are you rattled? It'll be okay. Let's talk it out.

On a surface level, this episode is effective because of the deceptively dry, matter of fact manner in which the narrator lays out what seem like tedious details of his life and job - his unattentive wife, how drill bits work, the length of oil pipe - and then applies that exact same ordinary tone to the ickier reveals he has in store for us, his unspoken houseguests. It's a narrative device that rarely fails, whether used to unnerve, as when Shirley Jackson states "Although the villagers had forgotten the ritual and lost the original black box, they still remembered to use stones," or to amuse, as when Donald Barthelme opines "I also thought four hundred dollars for a [gallows], on top of the expense for the drinks, invitations, musicians, and everything, was a bit steep..."

But what I think really seals the deal for those who have embraced this story is the peculiar mix of abject horror and empathetic love the narrator develops and expresses for the titular creature whom he refashions into a wife...how, despite claiming the lives of his friends, nearly costing him his own freedom during police investigation, and its possessing a body that previously existed only in his nightmares, he is stricken with pity at its predicament in a world it has never known, of being maimed itself by a threat it never experienced, and sees humanity in its visage. This narration is punctuated by equally scary yet poignant wails from versatile voice actress Cecil Roy.

It stood there dripping with red paint, blood-red from head to foot, like some horrible dream. And it put its hand on my arm. Its hand was stone. Living, moving stone. And it looked into my eyes. And mewed like a lost kitten...I discovered many things about it...it was invisible and couldn't see people when it was invisible; that if you sprayed it with mud or paint or greasepaint -- make-up -- then it could see people. And, believe me, I didn't want to see its body -- I can see that in my nightmares. But its face...I can't help wanting to see that pathetic, little girl face. I'm afraid maybe I've fallen-- Ah, but it's very beautiful. And when it's well made-up, it's...But making it up, rubbing greasepaint on a stone face that looks at ya and smiles and it makes sounds like a lost kitten yet. I can disguise the body in long dresses. She can’t hear very well and when she’s hungry, I have to stay out of her way.


The album I picked up hours earlier that evening also involves a narrator dryly observing and accepting sordid behavior from a female partner and himself. One of the tracks even features similarly jarring cries of lost children.

And I am the Water Boy, the real game's not over here
But my heart is overflowin' anyway
I'm just a tired man, no words to say
But since she lost her daughter
It's her eyes that fill with water
And I am much happier this way 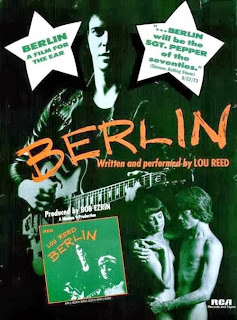 The recently departed Lou Reed released BERLIN in 1973, his third solo album after the breakup of the Velvet Underground and the success of his previous record TRANSFORMER, which yielded his sole Top 40 hit, "Walk on the Wild Side." Conceived as a song cycle, it tells a bleak story of a quickly curdling relationship between two drug addicts in the decadent city, where mutual abuse and infidelity lead to tragedy and icy resignation. Even for fans of Reed at the time, who were well-versed in songs like "Heroin" and "Waiting for the Man" depicting all manner of outré living, and likely well aware of his participation in such activity in real life, this album initially proved too dark to embrace. It received poor reviews, and was considered such a disappointment that for years, Reed never performed the album in full; it was only in 2006 that he revisited it for a series of concerts staged and filmed by painter/filmmaker Julian Schnabel, by which time its reputation had so improved it was listed at #344 on Rolling Stone's Top 500 Albums of All Time.

While BERLIN is not a horror story in the conventional sense of what most would say the term suggests, it offers up an interesting convergence to the earlier tale of monstrous embrace from the radio days. What is scary about both situations are the depictions of someone not so far removed from ourselves to willingly be suborned into heinous acts in the name of misplaced affections, be they an oil-rigger luring human food to his mate, or a failed dilettante passively watching his lover prostitute herself to get them more drugs. Also scarily real, the relatability of how unhealthily co-dependent these relationships are to their storytellers -- the narrator of "Thing" likes the face of the creature, but not much else about her, and for all his pity, does likely enjoy being in a position of power as its caregiver, much like meth addict Jim expresses how happier he is to not be burdened with Caroline's children, leaving her to turn her attention fully on him. They are both Water Boys tendering and enabling wounded yet destructive lovers.

The thing on the fourble board lost a finger.

Of Caroline, "Somebody else would have broken both of her arms."

As such, this radio drama and this musical drama are effective kindred, tapping into our fears of how susceptible we could be to doing and accepting bad things for what seemed like rational reasons, and our skill at putting aside our consciences to live with the evil we've done. And consuming each of them for the first time on an ordinary Tuesday made an extraordinary impact for me. Do I recommend this caustic cocktail for yourselves? If you're ready to appreciate the beauty of bummer endings, by all means. Just keep a night light and a white noise machine at the ready if the quiet is too much to bear.

If you don't have a white noise machine, METAL MACHINE MUSIC will do.