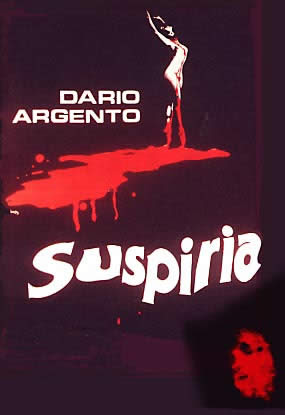 Over the years, between dozens of late-night dinner conclaves, press interviews for that defunct game show, and general exhortations to anyone who will listen, someone with only the most simplistic knowledge of me as a person likely knows that Dario Argento's SUSPIRIA is one of my desert island movies, and possibly the most influential film in my cinemaducation. When I first saw it, few articles were publicly available about it beyond a hardcore cadre of trusted genre film experts such as Tim Lucas and Chas Balun, so I felt that it was my duty to spread the gospel by writing about it in my college newspaper and duping multiple bootleg tapes. In 2010, thankfully, we have been graced with a beautiful (albeit out of print) DVD release, constant threats of a remake, and the internet has helped bring fans together so well and so large that I feel a little redundant writing anything about SUSPIRIA now.

Nonetheless, I'm inspired to talk about it one more time, because my steadiest reader and commenter Simon recently saw the film for the first time herself, and contributed a few pithy thoughts on it. Which in turn reminded me of an earlier instance years ago when, during a creative collaboration with steampunk author Rowan Bristol, a less enthusiastic opinion was offered up...

"I'm still puzzling the appeal of SUSPIRIA. It's an Italian horror film with a witchcraft focus, but the plot is fairly thin. What the creator tries to do is make up for the problems with lavish visuals. There's a lot of color, an amazing score, and just about every room is an exercise in trompe l'oeil. If you like starlets struggling through razorwire, or prettily falling through stained glass before being hung, go for it. Maybe Marc can explain why this one is fantastic."

Okay, I'll try. I always have difficulty trying to explain to non-believers why SUSPIRIA is such an important movie to me, but Rowan is a dear friend and deserves something for investing the time, and Simon is a new friend who will certainly appreciate some deeper thoughts. 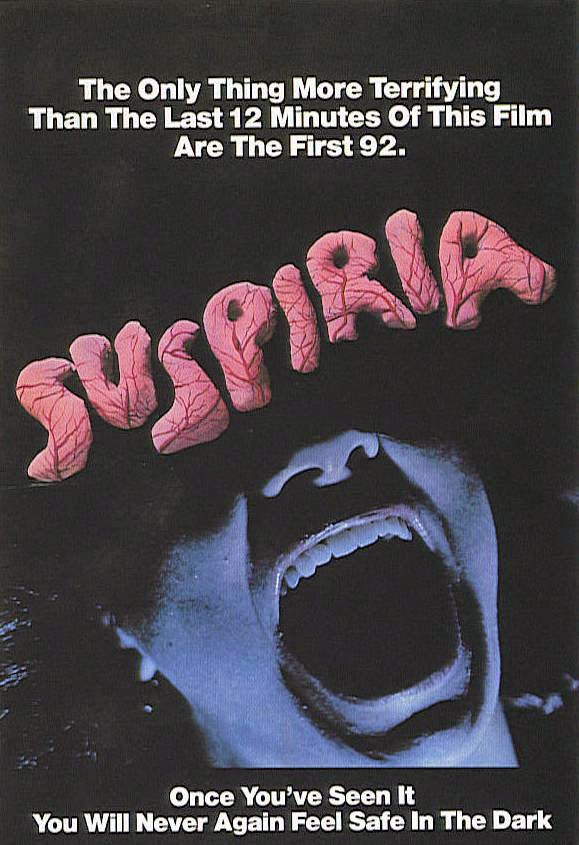 First, I must explain that I can vividly remember the lurid ads for the movie when it was first released in 1977 -- "The only thing more terrifying than the last 12 minutes of this film are the first 92" -- and even though I wasn't into horror movies at the age of 8 years old, I never forgot that brilliant tag. [Of course, it's a misnomer -- even in its uncut version, the movie only runs 98 minutes; perhaps a rushed copywriter meant to say "the full 92"] But even when I hit adolescence and became more curious about horror in general, I would not have any more contact with this movie until I was in college. It was not on videotape in America, and after its initial airings, hadn't played on cable TV for many years either, so effectively, it was off the radar for most Americans at that time.

October of 1988, I went to the first 24-hr NIGHT OF THE LIVING DREXEL horror movie marathon, presented by the theatre organization that I would later end up working with for over 10 years {but that's another story}. I knew nothing about the plot, just that famous ad copy, when it began. It was cleverly scheduled for 2AM, and even though they had a mono print, the sound was cranked loud. I pretty much was Jessica Harper's Suzy Banion, quite unprepared for the mad journey I was going to take for an hour and a half. By the time it was over, I had crossed the line from mere dilettante to full-on horror advocate, and Dario Argento became my hero for life.

So what was it about SUSPIRIA that made me turn a corner and become so devoted? Rowan is correct, the plot of ballet student Suzy discovering her boarding school is a front for a witches' coven is not the most fleshed out. But it is the presentation therein that carries me away. Precisely because of it's jarring candy color scheme, relentless music, and bizarre murder stagings, it is the closest film I have ever seen that unfolded with the logic of a dream. 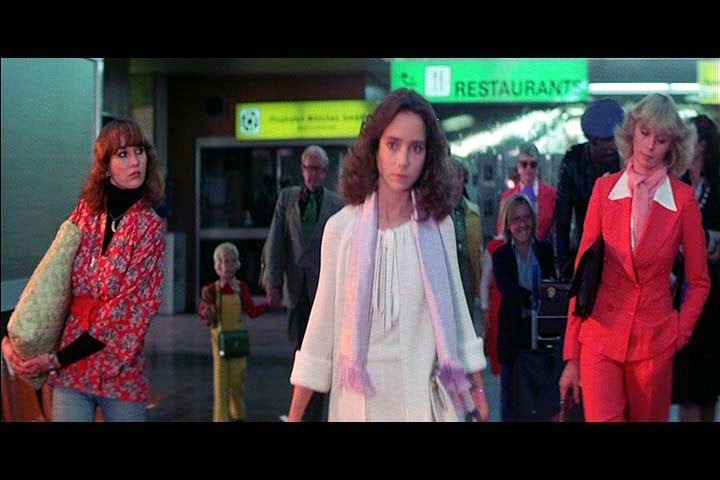 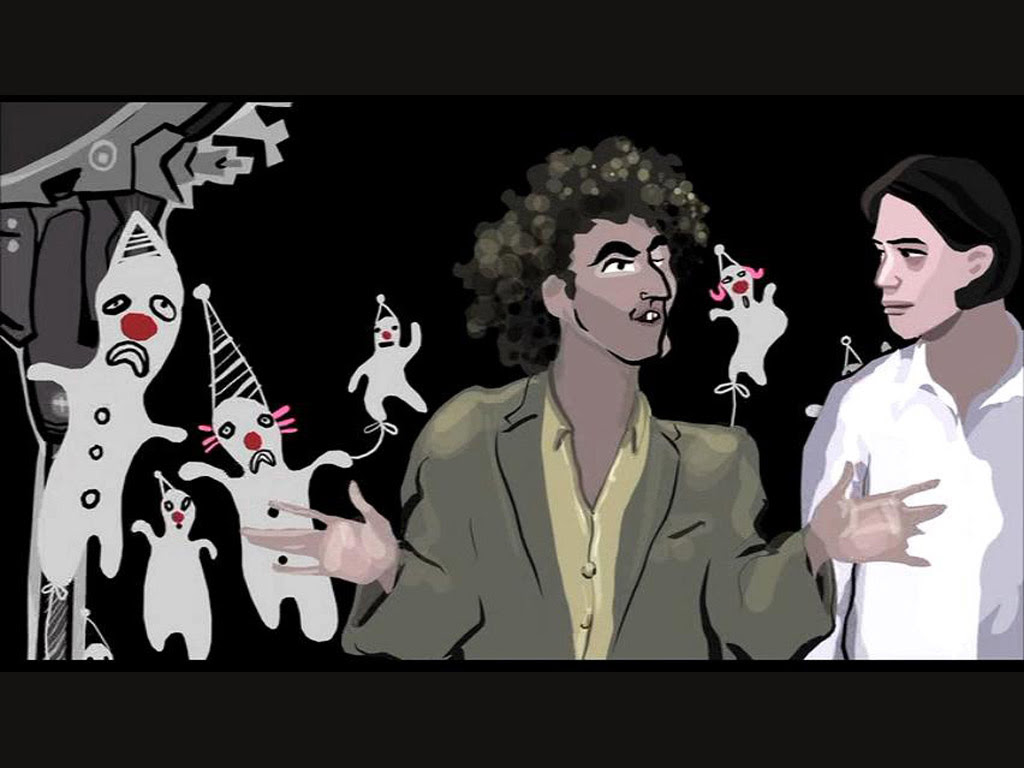 Dreaming is the most misrepresented concept in film -- hack directors always think if you just idealize everything, or make it all scary, or throw in cheap surrealism, presto: it's a dream. Of course, it's even harder to just explain dreams in daily life ("Okay, so I was in the shoe store, but it wasn't really a shoe store because they served pizza...") My dimestore psych studies have helped me conclude that generally, dream logic taps into ideas which don't get fulfilled in daylight, be they good or dangerous, and that minor details that don't serve the theme of your dream are ignored -- hence why objects inexplicably move or change shape, or as said in WAKING LIFE, light switches don't work. 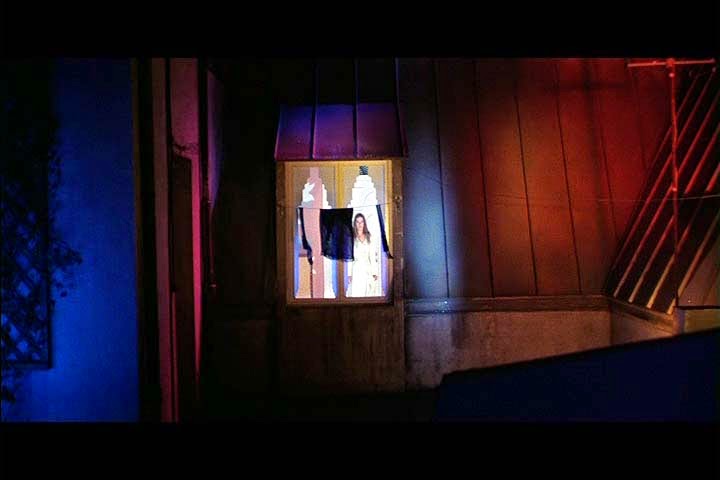 Thus for me, SUSPIRIA taps into many nascent fears that I often have. Being an outsider in unfamiliar, unfriendly territory. Being at the mercy of people who cannot be trusted. Having to tangle with circumstances beyond my experience or comprehension. The supernatural -- that noise the apartment makes with no logical source, for example. Dreams involve a heightened reality more often than a surreality, and I feel SUSPIRIA captures that -- hence the loud colors and music. It's not totally out of our world, just kicked up a few notches. 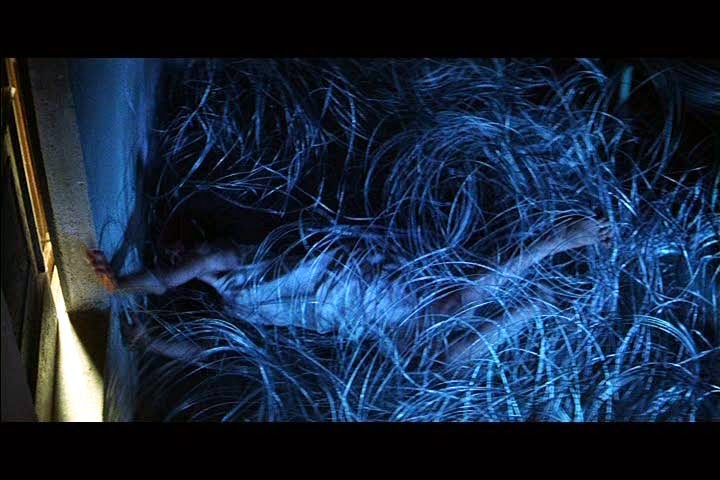 As for the murders and other creepy setpieces, they're extremely effective because of their cruelty and use of the body. There is a great quote from Mr. Tarantino where he describes that when watching movies, how he feels nothing if Arnold Schwarzenegger blows away half the Russian army, but if a character gets a paper cut, he winces, because that's real and personal. Better still, Mel Brooks' explanation of tragedy and comedy: "Tragedy is if I prick my finger, comedy is if you fall into an open sewer and die." Now granted, the chances of any of us falling through stained glass or barbed wire are very slim, but when we see such articles at rest, I know at least once I have shuddered at the idea of those items coming in contact with me. I am very skittish about my skin; I have never gotten a piercing or a tattoo, and I keep injections and shots to a minimum. So these murder scenes work because while I could evade or outsmart Michael Myers, you can't reason with barbed wire or maggots. Again, upsold reality. 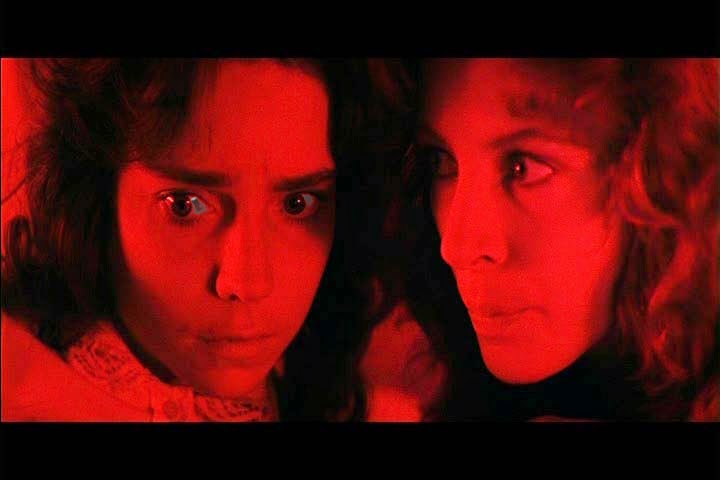 Even what would be considered a technical flaw adds to the experience. SUSPIRIA, like most European films intended for world release, was shot without sync sound, with the actors looping their dialogue later on. This is extremely blatant during Udo Kier's one scene, as he speaks velvety English when any genre fan knows that Udo struggles more with English than he does crosses or stakes. While this kind of dubbing is generally a source of amusement, in most of Argento's films, the canned, sterile quality of this dialogue to me kind of adds to the experience, as if the characters have been boxed in from frame one. And especially so in SUSPIRIA, because if the color and the noise are heightened, then so would be the silence and the lack of room noise. No matter how much characters are trying to whisper, someone is listening. 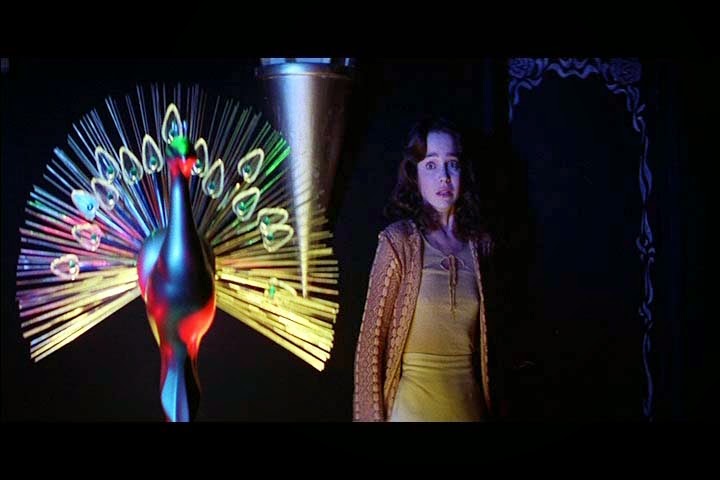 SUSPIRIA is Alice in Wonderland gone 180, a truly grim fairy tale. (Argento himself has said much inspiration came from Disney's SNOW WHITE) A story of an innocent in Germany (Black Forest?) among demons and familiars who must counter their deceptions and attacks if she is to find her way home.

Oh, and to explain that title? Thomas DeQuincey, a contemporary of Samuel Taylor Coleridge who wrote CONFESSIONS OF AN OPIUM EATER, wrote a drug-influenced essay called "Levana and Our Ladies of Sorrow," in which he described his vision of the Three Mothers, the source of all trouble and evil in the world: Mater Lachrymarum -- the mother of tears, Mater Tenebrarum -- the mother of darkness, and Mater Suspiriorum -- the mother of sighs. SUSPIRIA was intended as the first part of a trilogy that would depict each of the Three Mothers. A second installment, INFERNO, was released in 1980, depicting Mater Tenebrarum, and almost two decades later, in 2007, the final installment, MOTHER OF TEARS was made.

If I may be indulged a moment to explore just how ridiculous my fandom for this movie has been over my life...as I was finishing college, the two movies that I was watching repeatedly were SUSPIRIA and DIE HARD. If you got me stoned enough, I would adamantly claim they were telling the same story: they were both released by 20th Century Fox, involved wary unprepared protagonists with intense distrust of Germans, and ended with beautiful buildings going up in flames. And by 1990, as they had both inspired one sequel apiece, I was entertaining the terrifying fantasy of uniting the two franchises into one super-threequel: John McClane, enjoying spring break in Rome, once again gets caught up in fighting terrorists, this time a secret society that has been prepping the ascent of Mater Lachrymarum and her plot to unleash chaos upon the world just before Anno Domini, the Feast of the Annunciation on March 25 (the accepted conception date of Jesus of Nazareth, in order to maintain the running gag of "this shit always happens on Christmas"). I would have called it CRY HARD.


So, there it is. I doubt this will convert anyone who is not already a fan, but at least you can better comprehend my affection for the film. If you would like to learn more about Dario Argento in general, or SUSPIRIA in particular, author, critic, and TV personality Maitland McDonagh, who also publishes the Miss FlickChick blog, wrote what is still the gold standard book on the subject: BROKEN MIRRORS, BROKEN MINDS, which has just recently been republished in a new updated edition this year.

And meanwhile, avoid bland food as much as possible, especially that prepared by familiars...
Posted by Marc Edward Heuck at 5:20 AM