Biting the Hand that Draws You

Once the popularity of the theatrical cartoon short was established in the sound film era, in short order came the popularity among animators for breaking the fourth wall and acknowledging the divide between "real" and "cartoon" existence. And the earliest, and probably best adopters of this trope were Max and Dave Fleischer: Even the most casual cartoon watcher can likely identify their work, be it Betty Boop rising "Out of the Inkwell" or Bimbo and Koko talking directly to the brothers or other elastic gags. This was a sentiment that they brought to their solidly popular series of Popeye cartoons; periodically, the genial sailor might find himself getting help from an outside animator, or inadvertently in the auditorium with the audience themselves. In tandem with the tendencies to show Olive Oyl capable of wrapping her arms around her body like spaghetti and other surrealistic touches, as well as the often-improvised dialogue, the Popeye universe may have been predictable in that Bluto would get battered, but quite unpredictable in what else would be going on while that happened.

However, by 1943, the elasticity was beginning to stiffen. The Fleischers were effectively evicted from their own studio by Paramount due to debts incurred from their two feature-length films, while seeing their own relationship deteriorate into lifelong estrangement. Their replacements at the rechristened Famous Studios, Isadore Sparber and Seymour Knietel, did their best to keep the brothers' animation style in place, but were facing increased pressures, such as moving the studio from Florida back to New York, and cancelling the expensive Superman cartoons, leaving Popeye as their one franchise. The Popeye series faced continued "requests" to appeal to the war effort (many of the toons from this period feature mean stereotypes and have been pulled from TV), cutting back on animated detail to save ink and paper (these toons are lacking the imaginative look from the earlier Fleischer era), an eventual switch from black-and-white to color, and making Olive Oyl a more glamourous character with new hairdo and shoes. The demands were not enough to sour them on the studio - Sparber and Kneitel stayed with Paramount until their untimely deaths in 1958 and 1964 respectively - but much like other mandates from above that have ruffled animators' ambitions, they likely inspired one of their best cartoons.

CARTOONS AIN'T HUMAN was the last Popeye cartoon made in black-and-white, and takes an amusing and somewhat progressive "meta" approach to the series. Popeye wants to make his own cartoon to impress his lady and his nephews. While he doesn't lack ambition, performing multiple instruments and all the characters (the latter a testament to the underrated versatility of voice artist Jack Mercer)... 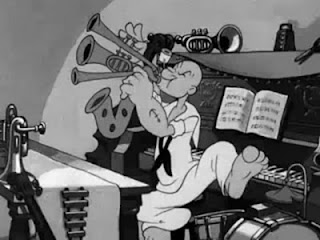 ...Popeye is not very skilled at doing the actual drawing. 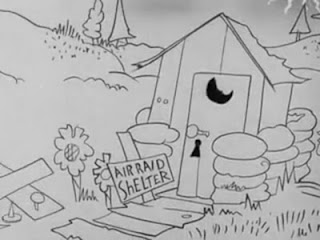 I can well imagine the non-union pen-and-ink men sending a subtle message to the Paramount brass: if you know so much about these damned cartoons, you try drawing them! The verdict as they see it is that if their seafaring superhero can't make a competent cartoon, the average studio flack probably can't either.

Moreover, what Popeye creates is a revealing look at his uncensored id, commenting on his current lot in life. Among the insights he allows us to see are... 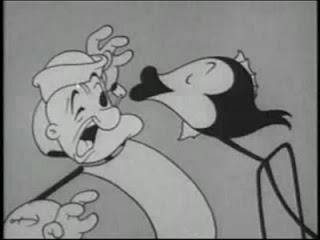 "Comes ta think of it, I donts get why I is attrackted to dis broad in da firsk place." 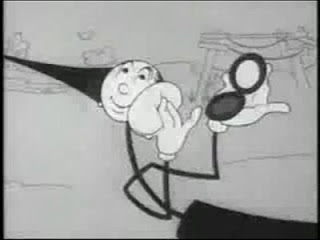 "An' boy duz she takes me gallantry fer granted!" 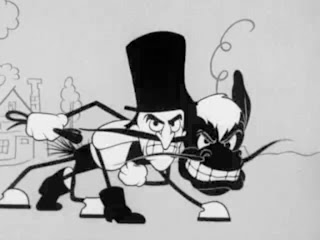 "Yeah, I sees ya talkin' durin' me pitcher. SHUTS THE FUSK UP!"

No question, after this outing, the Popeye series was never going to be quite the same. As such it's a fitting farewell to all those groundbreaking elements that made him strong, way past what would have been considered the finish.