"Tell them they can laugh at me"

On this first anniversary of the passing of David Bowie, a loss still felt profoundly by all of us here at Night Flight, we’re taking an opportunity to reflect on his underappreciated capacity for self-deprecation and comedy. 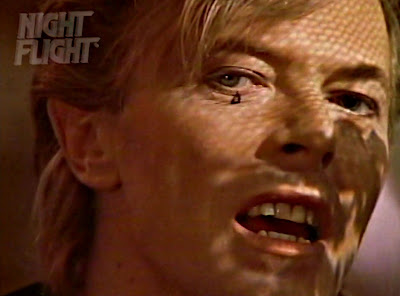 What he rarely took seriously was himself. In his music videos, in movie cameos, and in the media, he exercised comic gifts that delivered big laughs, often at his own expense.

In the formative years of his career, Bowie compensated for his intense shyness by disappearing into his stage personas and substance abuse. He spent a long sojourn in Berlin to kick his addictions and find perspective, and emerged in the ‘80s with a more positive demeanor. 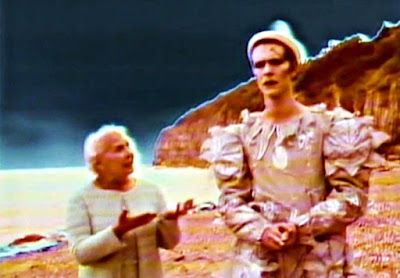 A key incident that shaped this philosophical turn took place as he was making the video for “Ashes to Ashes” in 1980 with director David Mallet. Bowie recounted the story to technician Michael Dignum during a break in filming for the “Miracle Goodnight” video from Blackstar:

“[I] had quite the attitude as a young pop star, it’s easy to get caught up in the hype. It changes you. So I was on the set [of] ‘Ashes to Ashes’… I’m dressed from head to toe in a clown suit…I hear playback and the music starts. So off I go, I start singing and walking, but as soon as I do this old geezer with an old dog walks right between me and the camera…knowing this is gonna take a while I walked past the old guy and sat next to camera in my full costume waiting for him to pass. As he is walking by camera, the director said, ‘Excuse me, [sir] do you know who this is?’ The old guy looks at me from bottom to top and looks back to the director and said, ‘Of course I do! It’s some cunt in a clown suit.’ That was a huge moment for me, it put me back in my place and made me realize, yes, I’m just a cunt in a clown suit. I think about that old guy all the time.”

Bowie proceeded to engage in what the British call “taking the piss out” of himself for years thereafter.

With director Julien Temple, he conceived a twenty minute short, Jazzin’ for Blue Jean, where he played both a hapless pickup artist trying to woo a resistant girl, and her favorite rock star, “Screaming Lord Byron,” a stand-in for himself.

There are frequent jokes about Bowie’s real-life bad behavior, and in one instance, the would-be suitor insults Byron with, “Your record sleeves are better than your songs!” The video won a Grammy for Best Short Form Video in 1985.

That same year, Bowie played a sleazy hitman in John Landis’ comic mystery Into the Night. In the film, he has a knock-down fight with a bodyguard played by rockabilly pioneer Carl Perkins, a sequence that surely amused him since, as a teenager, he had been inspired to be a musician by listening to 45s by Perkins and his contemporaries.

Bowie’s aforementioned need for artistic freshness became a subject of his mordant humor.

During his 1990 “Sound+Vision” tour, he declared that he was retiring his previous hit catalog from then on, vowing only to do new material in future shows. After the disappointing reception for his band Tin Machine and the solo albums that followed, he began to walk back that promise.

In a promo spot for their joint appearance on the season premiere of “Saturday Night Live” on October 2, 1999, Bowie’s about-face was referenced in an exchange of barbs between himself and host Jerry Seinfeld on their mutual reliance on the tried-and-true.

It wouldn’t be the only time he fired his wit at another target.

In 2006, he played himself on Ricky Gervais’ “Extras,” where, after being annoyed by the self-aggrandizing behavior of Andy Millman, he composes a song on the spot to cut him down to size.

When making the talk show rounds, Bowie was always an urbane and gracious guest, and often participated in sketches.

Here he is sharing a bevy of ludicrous revelations for “Late Night with Conan O’Brien”:

And, in this clip from a 1999 interview on the French Canadian MusiquePlus channel, he shared his love of early internet celebrity Mahir “I Kiss You” Çağrı:

Just before the end of 2016, Bowie’s son Duncan Jones posted a screencap from this interview, calling it his favorite photo of his father.

Having a laugh was also important to Bowie in his private moments.

He released a list of his “Top 100 Reads” in 2013 as part of the touring exhibition “David Bowie Is,” which showcased cherished items from his life.

Amid highbrow fare such as political non-fiction and classics like In Cold Blood, he included the British humor periodical Viz, a Mad-magazine style parody of UK tabloid and music press with a punk rock bent. 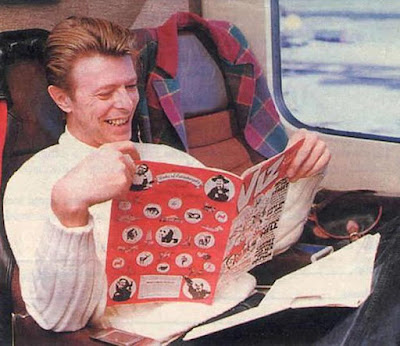 While the creators were grateful for his fandom, Bowie himself was not immune from their scathing jokes, as shown in this full-page lampoon from the early ‘90s: 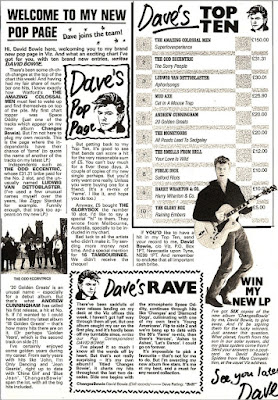 In one of his earliest compositions, “When I Live My Dream,” he wrote, “Tell them they can laugh at me / But don’t forget your date with me / When I live my dream.”

Over five decades after that song emerged, it can be said he lived his dream to the fullest and happiest, and we got to enjoy it with him.

So today, though we’re sad he’s not around, let’s put on one of his immortal songs, and have our own Zoolander & Hansel-style walk-off, and imagine that he’s watching us and smiling at it all.

Night Flight’s video profile of David Bowie from December 4th, 1987, features “Ashes to Ashes” and other dynamic videos from three decades of his career, and is available to watch as part of our special David Bowie collection at Night Flight Plus. 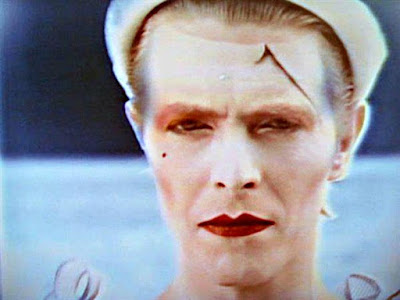