"Let's get into trouble, baby!"

Now available for streaming on Night Flight Plus is a special behind-the-scenes episode — originally airing on October 15, 1988 — prepared by music video director and “Night Flight” contributor Bill Fishman to promote his feature film debut Tapeheads, a rock ‘n’ roll comedy which still delivers a lot of savvy laughs about the music business for any comedy fan looking to get into trouble. 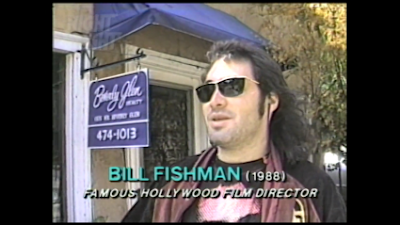 Bill Fishman once summarized his motivation to direct music videos by quipping, “I couldn’t do much worse.”

In the mid 1980s, the self-deprecating director in fact delivered a streak of memorable videos for the Ramones, Hank Williams Jr., and George Clinton.

In the course of attempting to get more money to shoot his initial breakout hit — “Institutionalized” for thrash pioneers Suicidal Tendencies — he befriended producers Michael Nesmith and Peter McCarthy, whose recently-finished film Repo Man had featured the song.

McCarthy was drawn to an idea Fishman had been developing about the wild environment of making videos. Together, they scripted Tapeheads, about two friends, guileless Josh and conniving Ivan, who stumble into success and political intrigue through their scrappy productions.

Former Monkee Nesmith — who won a Grammy for his musical sketch video Elephant Parts — and NBC president Brandon Tartikoff — who had expanded into films after launching hit sitcoms and TV’s “Miami Vice” — loved the final script, and eagerly agreed to back the film. McCarthy said it was the fastest greenlight he ever received. 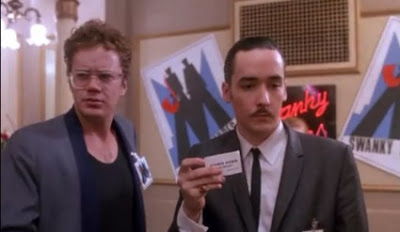 The script found its way to John Cusack and Tim Robbins, who were doing a play together at Robbins’ longtime L.A. theatre company The Actors’ Gang. The friends wrangled an audition, and improvised at length as the characters. The filmmakers were knocked out, and hired them in short order.

Cusack modeled his performance as sleazy but charming Ivan on snatches of Tony Curtis in Sweet Smell of Success and Robert DeNiro in The King of Comedy, using buzzwords from self-help books to flesh his character’s drive. Much film dialogue came from actual encounters Fishman had with industry folk, repurposed into different situations, including the movie’s catchphrase “Let’s get into trouble, baby.” 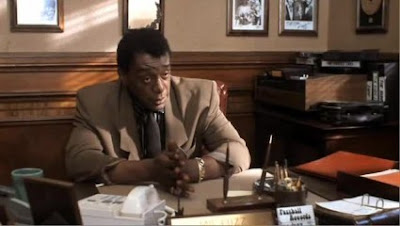 The bright and unmistakably eighties production design was by Catherine Hardwicke, who would move up to big-budget pictures like Tank Girl and Three Kings before directing the massive hit Twilight. 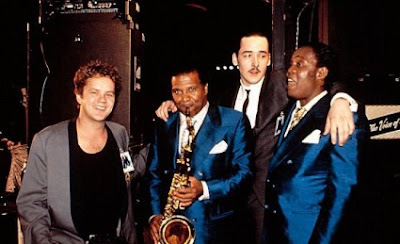 Musical aspects were treated very seriously, as the plot involved our heroes trying to revive a downtrodden R&B act, the Swanky Modes. Fishman traveled the country looking at many beloved soul artists trying to determine who should play them, before picking Sam Moore (of Sam & Dave) and Junior Walker. Blondie bassist Nigel Harrison was the film’s music supervisor, choosing tracks to feature among the original songs created for the Modes. In the press kit for the film, a complete fictional “history” for the band was helpfully provided.

In a commentary recorded for the 2001 DVD release, Nesmith and Fishman noted how well Moore and Walker clicked as the duo. During shooting for the climactic concert sequence, they saw the recruited audience, initially unfamiliar with either singer’s legacy, become legitimately enthusiastic for their performance of “Ordinary Man.”

Besides the antics of Cusack and Robbins, what most fans remember fondly from Tapeheads is the bizarre, hilarious arc of Clu Gulager’s would-be Commander-in-Chief. This press conference exchange is a favorite, scarily predicting the modern day obsession of media and candidates alike with genitalia size!

Though its creation went smoothly, the release of Tapeheads met with assorted problems.

DeLaurentiis Entertainment Group, who originally financed the film, was having severe money troubles; as the production went on, Fishman recalled seeing staff and office furniture disappear. DEG went under, and the film was tied up in bankruptcy proceedings for months.

Once freed from creditors, small arthouse distributor Avenue Pictures agreed to service the film in the fall of 1988, but even after a well-received screening at the Toronto International Film Festival, they failed to get it shown in New York or Los Angeles during the short-lived run. 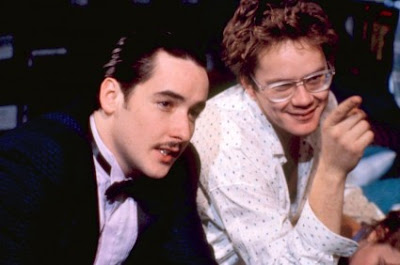 Cusack and Robbins both did promotional interviews, but often behaved as if they were still their characters, giving irreverent answers and irritating the press. An interview they taped with Joan Lunden for “Good Morning America” was even shelved due to what ABC called their “unprofessional” behavior.

Fishman had a history with “Night Flight” — appearing on the program in 1986, as well as having many of his videos showcased — so to spread awareness of Tapeheads, Fishman created this custom episode, featuring farcical vignettes about him spending the day shopping for mansions and yachts, to celebrate his big time director status, interspersed with two of his music videos (“Institutionalized” and “I Wanna Be Sedated”) and exclusive outtakes of the cast goofing around, footage never made available on any subsequent home video release. 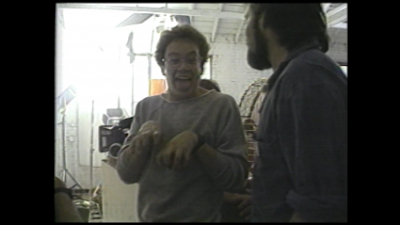 In one segment, Fishman shows how he staged the film’s infamous “Baby Doll” video, where a pretty-boy synth band is assaulted with paint, glitter, and feathers in a single take, decades before OK Go would pull a similar trick in their “This Too Shall Pass” video.

Fishman cautions the band actors to keep performing regardless of what happens, and their shocked reactions are very real.

Tapeheads got a second chance when, in early 1989, it finally opened in Boston, to coincide with its soundtrack release. Nesmith suggested to CNN that the city was a good luck charm.

Fishman still directs music videos for his Fallout production company, with The Decemberists and Shirazee among his recent subjects. 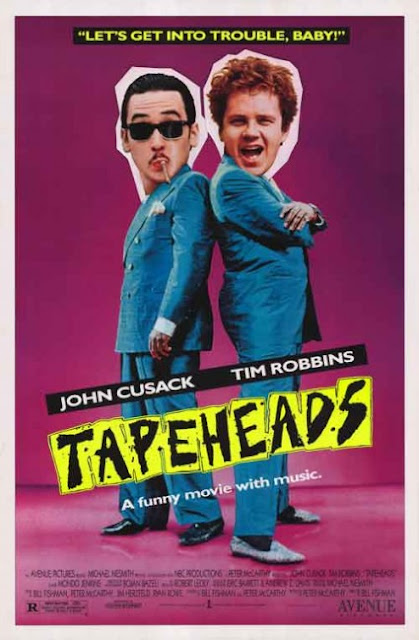 Posted by Marc Edward Heuck at 2:42 AM