Protect Me from What I Want 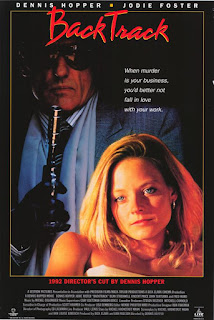 If you do the cursory Google searching, you will find plenty of information about Dennis Hopper's troubled and mystifying 1990 film BACKTRACK. There will be the requisite negative and baffled reviews. You'll find a thorough comparison and breakdown of differences between the initially-released 98-minute cut retitled CATCHFIRE, for which Hopper demanded an Alan Smithee credit, and the 1992 compromised-but-approved Director's Cut sanctioned by Showtime and released on VHS, including a crucial revelation of a character's heel turn that is completely missing from the shorter cut. You'll find scintillating details of the shoot, involving a writer's strike, Hopper's white-knuckle sobriety, and spur-of-the-moment attempts to include his favorite artists and actor friends. You'll even find revealing testimony from credited screenwriter Ann Louise Bardach and uncredited punch-up writer Alex Cox. In short, you can find the How, the Who, the What, the When, and the Where. What you will be likely left without is the Why? And since Hopper is gone, and co-star Jodie Foster is probably about as anxious to revisit that experience as she is to share a stage with Seth MacFarlane, that's where my speculative prose comes in.

I was keenly following the trajectory of BACKTRACK during my college years, as a fan of Hopper and of then-upstart studio Vestron Pictures, but had never gotten around to actually watching it; I didn't have Showtime when they aired the Director's Cut, and always just had something else more pressing whenever the VHS was handy. When I saw it was released on DVD in 16x9 widescreen, with Hopper's preferred title and director credit on the cover, naturally I eagerly bought it, though again, it sat on my to-watch pile for a long time. Upon finally watching it, I was increasingly taken aback by the very abrupt cutting, where many scenes seemed to be trimmed to the most necessary seconds, very reminiscent of the Fox-sanctioned Kenneth Lonergan-contested theatrical cut of MARGARET. I kept thinking, Egad, imagine how much more horribly incoherent the CATCHFIRE edit must have been. By the time my DVD player stopped at 98 minutes, despite the 102 promised on the cover, Sebastian Cabot as Mr. Pip may as well have been right at the controls of my remote saying, "Look at the cover again - whatever gave you the idea this was a Director's Cut? This is the CATCHFIRE edit!" Bloody Artisan mastered a pre-Smithee print to DVD, and Lionsgate has never done a damned thing to correct it!

Regardless of bad editing and missing storyline, I still have a decent hunch about what Hopper had in mind. As he says himself during the film, "There's something going on here that I really don't understand, but I like it." 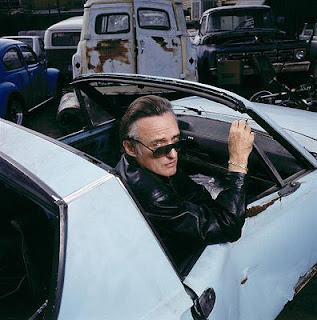 At the time production was initiated, Hopper was enjoying a career revitalization. He had received the best notices in years for his performances in HOOSIERS and BLUE VELVET, and positive reviews for directing Sean Penn and Robert Duvall in COLORS, his first major studio picture since THE LAST MOVIE in 1971. But as writer Ann Bardach reveals in her podcast interview, he was still not quite feeling calm about it all. And with a life which up to that point had so much drama, including being pronounced clinincally dead during the making of Philippe Mora's MAD DOG MORGAN, he probably had good reason to worry about lapsing into those dark behaviors. Moreover, while COLORS was a well-liked movie (except by members of the LAPD), and Hopper brought his counterculture experience to good use in exploring gang mentalities and race relations, the film seemed to be more of a probationary test, of Hopper proving he could be a disciplined studio director, than a truly personal project. Thus, one can imagine that Hopper, having proven that he could behave and not be troublesome to Hollywood, now longed to once again indulge in less-structured creativity as he had been allowed to in the early '70's.

Thus, where producers saw a MIDNIGHT RUN-style road movie in the original screenplay by Rachel Kronstadt Mann and Stephen & Lanny Cotler, and Barach, then a crime reporter for many newspapers, saw more of a gritty Patty Hearst-style story of kidnapping and bonding, Hopper likely looked at the plot of a hitman so fascinated with his target, an avant-garde artist, that he instead chooses to abandon the hit and take her on the lam with him, as fertile ground to create an extended metaphor about being valued for one thing yet desiring to try something else. Now that he'd delivered a hit to Orion with COLORS, and Vestron had made a splash with DIRTY DANCING, he was in a good position to make the kind of artistic demands unavailable to him for a long time. And from the unconventional casting of Vincent Price as a mob boss, to unscripted cameos by Bob Dylan and Toni Basil (and, in the apocryphal 180 minute cut first submitted to Vestron, Neil Young), to prominent featuring of art by Jenny Holzer, Charles Arnoldi, and Laddie Dill, he got them fulfilled. On paper, he was making a crime thriller. But if THE LAST MOVIE was his exploration of deconstructing cinema myth on Universal's dime, BACKTRACK was his exploration of leaving safe filmmaking behind on Vestron's nickel. Even the very title BACKTRACK suggests a return to old ways, since within the film itself, while everyone is tracing the movements of major characters, nobody actually goes back to a point of origin.

Foster's character Anne (modeled somewhat on contributing artist Jenny Holzer herself) begins the movie as a successful but ambivalent creator of electric messageboard art with confrontational messages that would appear to be a passive-aggressive call for attention ("Murder is Unavoidable", "Abuse of Power Comes As No Surprise"). When she witnesses a mob murder, and determines police protection to be inadequate, she flees town and changes her identity, and when she is unable to take suitable living money with her, takes on different jobs that cater to her gifts, first writing advertising copy (which is how Hopper first discovers her subterfuge), and later serving as caretaker for another's collection, before she is finally found and abducted by Hopper's hitman Milo. This trajectory suggests the plight of a headstrong actress who becomes a threat to powerful interests (mob = money men, police = studio?), and in order to survive, must slum her talents in advertising (like many an actor reduced to selling cereal bars or a poet's words co-opted for said sale), and when that's no longer viable, being entrusted with someone else's art (teaching classes, archiving, unglamorous isolating stuff) with the extra pang of living in a former movie theatre. A situation that is ripe to be taken advantage of by someone who will offer life in exchange for service. 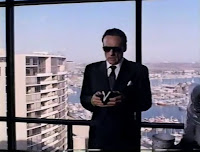 Similarly, when the mob wants Anne neutralized, they call in Hopper's Milo, and give him whatever he wants in order to do his job - a lush accommodation with Bosch paintings, Charlie Parker albums, three computers, a budget to buy art pieces and pay parking tickets (a director, entrusted to make a "hit" movie - being given all he wants by a studio). When the crooks grow impatient, they send a young inexperienced lunk to shadow Milo to his increasing annoyance (the line producer sent by the money men to supervise the production), leading to his death (ejection from the set, wrath of the producers). During his deep research into Anne's life (what makes an actress tick?), Milo dabbles on the saxophone, only to find he cannot play well at all to his frustration. Milo is the old restless artist who has been paid well for years to do one monotonous thing and do it the same way each time, but yearns to do something new, something that matters more to him. And Anne is the muse he believes can facilitate that. 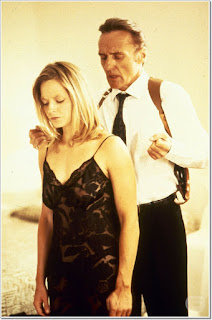 Which finally provides us with a little more rationale for what has been the constant thorn to every reviewer of the film, Anne's seemingly overnight Stockholm Switch from reluctant hostage to willing conspirator. It's a glaring plot hole in the CATCHFIRE edit, and still plays a little weird in the Director's Cut, where more footage shows that their relationship is not quite as hostile as initially presented. When viewed through the prism of the seemingly endless cycle of director/actress infatuations, it plays a little more plausible - the man who initially seems intent to break the woman's will through knowledge of all her vulnerabilities, but gradually reveals his own instead, leading to a mutual push-pull and eventual trust. I'm not justifying its presence in this script, it still just feels like wish-fulfillment on Hopper's behalf, especially as recounted by Foster, and in light of seeing him engage in similar onscreen May/December tropes with Amy Locane and Marley Shelton and Asia Argento. But remember, we're putting this movie on the couch, not on the pedestal. 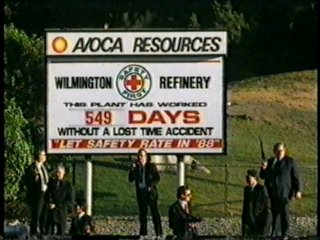 Avoca, the seemingly ubiquitous corporate front of Vincent Price's criminal organization, carries a loaded meaning or two as well. Stemming from the Latin term "vocare", "to call", it can be construed in its presented form - "a voca", "a voice", how people are allowed to express themselves - or as the root of the word "avocation" - a hobby, activity, your life's calling. And in the course of the film, they want Milo to stick to his original calling, and take away Anne's voice for change. Not to mention that it's an oblivious male driver for the corporation who screws up Anne's otherwise ingenious plan to mail a package out from another city, and once again lead Milo to her.

Besides all the allusions to the filmmaking process embedded in BACKTRACK, there is a definite sense of allusion to the aforementioned THE LAST MOVIE. When Milo arrives in Taos, New Mexico to finally collect Anne, he comes across a group of Native American Pueblos in ceremony, with a large burning mascot holding people's attention. While more than one reviewer has compared this imagery to THE WICKER MAN, and I myself was reminded of the "Winter Witch" burning from Fellini's AMARCORD, it seems almost no other reviewers recognized a similar sequence from THE LAST MOVIE, when local Peruvians are cavorting with their own wooden-made cameras and other burning ephemera, as local priest Tomas Milian expresses his concerns to Hopper about the cultural confusion his film crew has brought to the region. (Unfortunately, I can't find any stills properly approximating the symmetry, so bear with me) 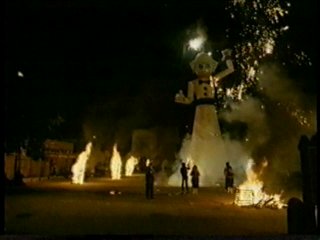 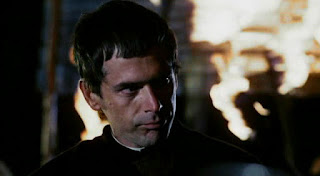 There's certainly other elements that lend themselves to my central idea as the story goes on, but I think I've given you enough here so that you can apply them on your own, if and when you get around to watching the film yourself. Which raises the question, should you? I would caution that only significant Hopper or Foster completists should attempt to do so, and even then, would be better served tracking down an original VHS of the Director's Cut and zooming it in to your widescreen TV, so it's asking a lot. But if you are indeed that complete and that determined, I think you'll find it, well, an intriguing objet d'art. And, if in time we do finally get a proper DVD release of THE LAST MOVIE, it would make a particularly interesting double feature with it, as you would get to witness Hopper's two most unconventional outings that had conventional origin.
Posted by Marc Edward Heuck at 12:56 PM