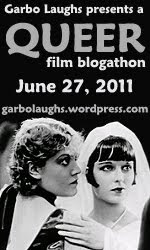 The following is my yet-again-under-the-wire contribution for today's Queer Film Blogathon, mounted by Caroline at her Garbo Laughs blog, in celebration of LGBTQ Pride Month. I may be more of an occasional dinner guest of Dorothy than a full-on friend, but to paraphrase the old bumper sticker, I remember when "queer" meant "unusual and arousing curiosity," and as far as I'm concerned, it still does. As such, I'm eager to put my $3 bill's worth into this discussion.

Aside from my personal affinities, I have a particularly interesting history with LGBTQ media. For a period of about 2 years in the mid-'90's, I was the resident film critic, and only straight male writer, for a lesbian-themed 'zine in Columbus called Sovreignty for Women, a position given to me most generously by its publisher, who cared more about my talent as a film lover than my gender or sexual identity. The inherent humor and ironies within such a position notwithstanding, I did not shy away from rankling the potential readership with my opinions on film in general, and gay film in particular. In an introduction for an fall '95 article on my favorite portrayals of gay people in then-recent film, I opened up with this toss of the gauntlet:

After the first two installments of my column, I know some readers somewhere must be asking, “If this magazine is published by and for gay women, why aren’t you writing about gay movies?” And upon first thought, I find this question moot. To believe that gay people are only interested in gay movies is an insulting stereotype, as ludicrous as believing that African-Americans are only interested in rap music or Japanese people are only interested in Kabuki plays. Just because Hollywood seems to be controlled by straight white men does not make the entire enterprise sick.
There’s a bigger reason for me, though. Most “gay” films bore me. They coast on their subject matter alone, with no regard to compelling plot, characters, or arresting visuals. They play like grown-up ABC Afterschool Specials, thinking as long as they keep mentioning homosexuality, the homosexuals will watch. AAANK, wrong answer. Tom Hanks deserved his Oscar for PHILADELPHIA, but the movie itself is a long “Gays are our friends” morality play. For every lesbian I’ve met who enjoyed CLAIRE OF THE MOON, I’ve met two who would rather watch karate films. EVEN COWGIRLS GET THE BLUES is best described by Lea DeLaria as “Even Worse than You Think.” And as much as I love Sandra Bernhard, INSIDE MONKEY ZETTERLAND is a pretentious, self-righteous yawn.
To me, I don’t really give a damn about the sexual orientation of the characters in the movies I watch. I care about the characters. Sure, perhaps the monopoly of straight characters over gay ones in films would appear to the average radical as being some sort of “Only straight is good” conspiracy, and I object to the previously caricatured portrayals of gays and lesbians in the past, just as I do stereotyped minority portrayals. But I am also tired of how the pendulum has swung to make every minority angelic and politically correct, such as the black police superintendent that must bench the white loose-cannon cop. If a non-sympathetic movie character happens to be gay, such as Lee Harvey Oswald in JFK, or even suspected of being gay, like serial killer Jame Gumb in THE SILENCE OF THE LAMBS, loud wearying protests arise. Using that logic, shouldn’t straights be protesting their buffoonish portrayals in gay films? Everybody chill! 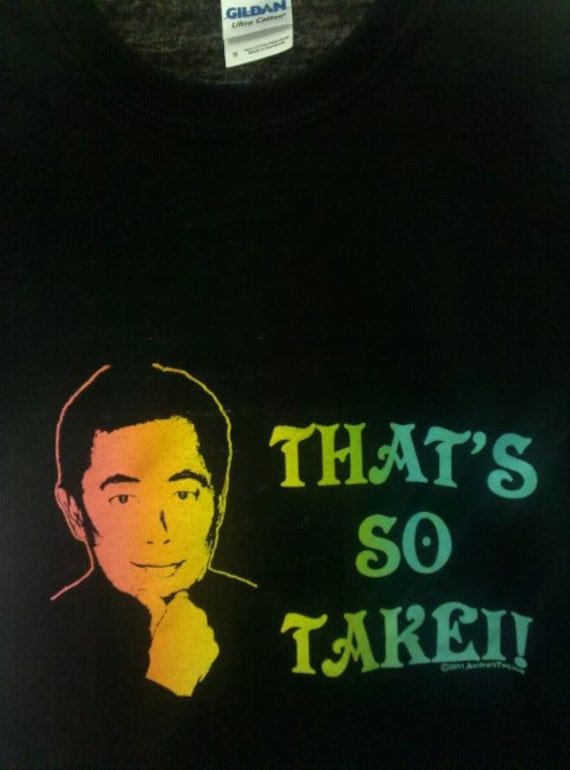 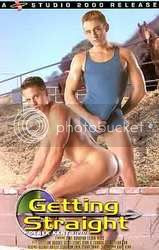 But back to the critical matters at hand. This whole month, in anticiption of the blogathon, Caroline has been taking a film containing signficant gay content from each decade of the 20th century once narrative film became a commercial medium, and analyzing it as both entertainment and historical document. It's interesting stuff to read. And in an oddly appropriate way, I like the fact that while her posts are looking at the history of gay portrayal on film, mine is looking at the future, and a rather promising future in the case of my particular choice. In full disclosure, I came upon this film because of the involvement of a close friend in its postproduction, but I promise that my enjoyment of the finished product was solely due to its artistic merits and not just because of my relationship to one of the creative contributors.

For decades, a common story theme in gay-themed films, from the arthouse to the grindhouse, has been the journey of the Hustler, the Rent Boy, the handsome, anonymous young man who goes from one sexual encounter to another, bearing Voltairean witness to all the partners' tales and desires. In skillful hands, this has served for great drama, as in Pier Paolo Pasolini's TEOREMA with Terence Stamp, where the stranger seduces male and female members of the same household, unlocking their buried ids, but more often, the trope has been employed either in the service of simplistic titilation for the viewer, watching multiple types of guys get it on, or for cheap moralization, with degradation and despair compounding from the hollow sex and abusive johns until the protagonist is left ruined or dead. 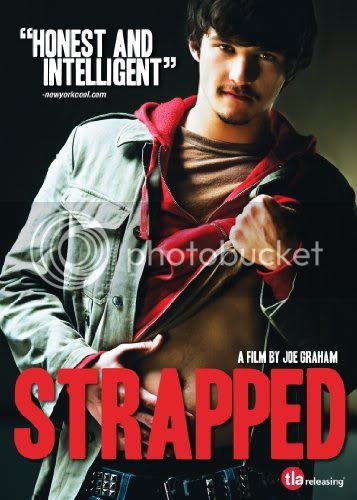 As such, anyone quickly browsing the gay DVD section (because, sadly, we aren't open-minded enough to integrate movies with gay protagonists into the ordinary genre categories) would be forgiven if they glanced at the advertising for STRAPPED, with its image of fetching lead Ben Bonenfant teasing the reveal of a bare chest, and initially wrote it off as yet another man-pageant posing as a drama. That was the initial concern of author and blogger Ian Rosales Casocot, who pretty well spoke for myself and most casual movie hunters in the opening paragraphs of his rave review of the film...

Well, you know that old joke about what the difference is between a romance novel and a pornographic manuscript: the lighting. And writer/director Joseph Graham knows a lot about lighting, not just in a literal fashion, since STRAPPED has a beautiful look that transcends its ultra-low-budget, but also in a spiritual fashion, because his approach to the proceedings is, yes, illuminating! Immediately at the film's opening, during the first appointment for our never-christian-named hustler, the staging is tender and unexploitative, playing like the ending of a short story, but it's only the beginning. And as the protagonist leaves, and changes names and refashions himself to the roles suggested to him by the colorful series of men he meets that night, we feel that we are not only learning about the different experiences and lives all these men have led, we also are actually learning something about this proverbial blank slate in his dealings with them, instead of just watching the act of prostitutional pretense. The other characters, who to an extent are representing familiar types of gay men - the self-hating closet case, the hedonist, the wizened pioneer - play like real people and not just attributes. Graham, forgive me for abusing the metaphor one last time, puts the spotlight on a whole group of people that we have heard about but few of us have known, and made us care about them. I would be interested in how any one of their stories played out long after our hustler has left them. 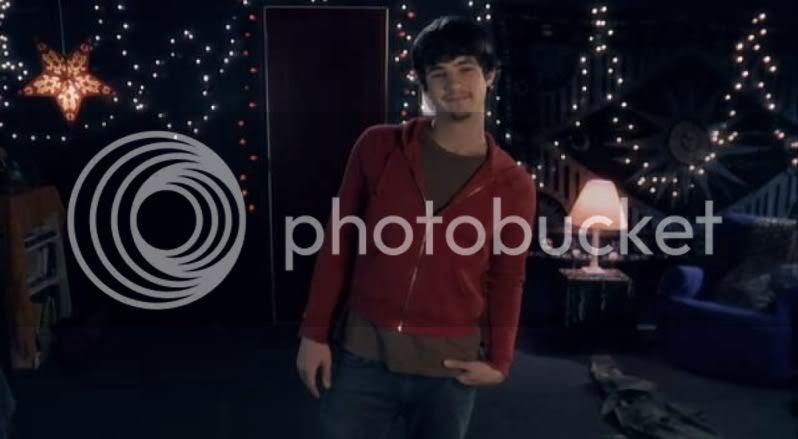 Let's talk about star Ben Bonenfant. He's terrific in this role that always keeps one last card unrevealed. He's playing a faker, but nothing ever feels fake. He could be all of these boys, he could be none of them. It doesn't matter: as actor playing actor, he nails it. And, yes, it helps that he is very attractive, not just to his hook-ups, but to us the audience, because we know what it feels like to want to believe in him and what he represents to each man he meets. It's that feeling of deep and widespread audience empathy that has quite often been missing from other gay films, and what makes STRAPPED such a special treat.

And in the spirit of the personal admissions from above, when he became intimate with his most compatible companion of the evening, I not only felt an emotional elevation from a story turn that depicted two wandering souls were finding mutual happiness, I also felt a primal excitement that these two good-looking guys were going to make out! And I think this is one of Graham's most significant successes in this movie, and why I think he has the potential to create more great movies. Which is clearly what he was after, as he told to Gaydar Nation in an interview this past winter: 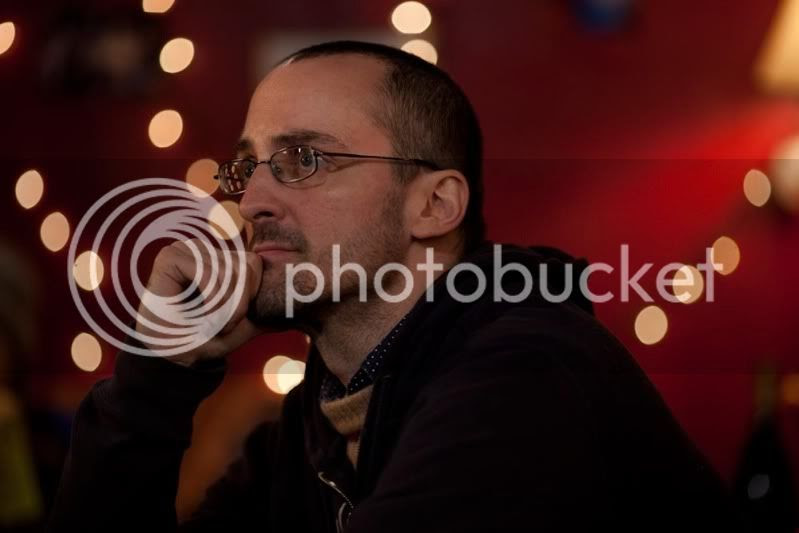 Graham is not only correct, but he's done something about it. It's not something as trivial as casting two hot boys and stripping them naked, though I suppose that's what I'm making it sound like. It's that he's taken what is a fait accompli - after all, if he blue-balled the primary audience, and didn't have a really good lovemaking scene, this would end up being his only feature film - and created real suspense and emotion around the moment everyone has been waiting for. Which is what every great director does in the genres they excel in. Like Radley Metzger with SCORE, or John Cameron Mitchell with SHORTBUS, he presents gay sex in a way that it transcends any sort of straight viewer's trepidations, and makes it as joyous as any heterosexual climax in a standard movie romance. In short, as I demanded before, Joseph Graham did not preach, pander, or bore me. He entertained me.

I don't think I would recommend this to every single straight person I know, not because of the subject matter or the sex, but because its low budget and mostly-conversational story would probably not satisfy a palate that is used to more polish and action. But for anyone who likes to step outside of their comfort zone, is interested in affairs of the heart, and wants to see the debuts of a charismatic actor and a gifted filmmaker, you should definitely take a chance on STRAPPED. It has not gotten much coverage beyond the gay media, though it did receive very good mainstream reviews fromThe New York Times and DVDTalk. I'm going out on a limb and predicting great things for Graham and Bonenfant, so anyone who is in a position to give them work, help prove me right!

And to bring things full circle, what brought me to STRAPPED in the first place was Graham's extremely wise choice (winking) to enlist one of my favorite friend-fronted bands, Windows to Sky, to provide a few songs for the film. I was already grateful to him for giving my colleague's band a gig. Now I'm even more grateful that it was in the service of such a very good movie. Here is one of their songs, specifically written for the film: