Tear the Truth off the Suckered 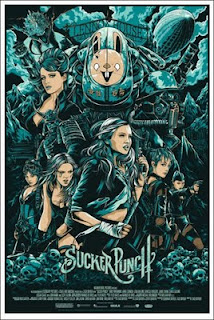 Last night, I finally went out and saw Zack Snyder's would-be Gyno Gearloose epic SUCKER PUNCH. Or as I will be facetiously be calling it among my cattier friends, PAN'S LAPPYDANCE. No, it is not good. I don't hate it with the ridiculous fury of a thousand Sunny D drinkers as Geekscape writer Jonathan London has correctly criticized, but I must stand with the majority of my close friends and trusted voices and agree that it is a loud, mostly unpleasant hodgepodge of dubious grrl power, pointless genre side trips, and yes, a blatant point-by-point horking of Guillermo Del Toro's deeply moving parable of trauma and transcendence, right down to its Dickensian ending. I will be surprised if I don't hear reports from the next MTV Movie Awards that Del Toro put Snyder in a headlock and maniacally giggled, "HERE IS MY SEQUEL TO YOUR RIPOFF OF MY MOVIE. I CALL IT SLEEPER HOLD!"

And, I am ashamed to say, I will probably go see it again on its inevitable second life on the "Awful is the New Awesome" revival theatre mandate, and I will probably buy the threatened unexpurgated edition on DVD later this year. I am completely cognizent of every wrong thing in this movie that should deign it to the scrap heap of "So Bad It's Gone Past Good And Back to Bad Again" with other unloved failures like THE LEAGUE OF EXTRAORDINARY GENTLEMEN and THE DUCHESS AND THE DIRTWATER FOX, films that even the most rabid proponents of cinema d'ordure will never dare try to lure Wiseauholics to watch at midnight. But for all my intellectual distancing, there was that sliver of my psyche that was having a good time.

It could be the relentless injection of elements from steampunk and anime that has not been prevalent in most major studio movies, imagery that I do enjoy looking at: In the larger fantasy scenes I heard a rather Ponsonby Brittarian exchange in my head..."Well, there's something you don't see everyday, Chauncey." "What's that, Edgar?" "An art deco bullet train traveling towards the rings of Saturn populated by faceless robots." "Oh, I don't know, Edgar; mass transit has taken some amazing strides." It could be that I was slightly impressed by Snyder's commitment to a crazed vision - "So, you're really going to use a 21st century battle weapon to mow down WWI zombies? This is really happening? Okee dokee then." Or, it could just boil down to the fact that I'm an unrepentant perv who's had a lifelong weakness for girls in sparkly tights and cabaret pumps. Looking at the sullen, joyless, wizened faces of the two other men who were in the auditorium with me, I do sadly fear it's that last explanation...and that they are my future self. But at the end of it all, SUCKER PUNCH crossed my line and became that dreaded trope known as the Guilty Pleasure. 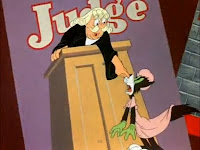 Like many of my contemporaries in filmmaking and criticism, I am often loath to use the term "guilty pleasure" to describe a film. Primarily because 85% of the time if I like a movie there is no guilt in it: I can point to something in there that makes it worthwhile, I can argue that it is legitimately good. If asked, I will mount passionate defenses of oft-derided efforts like THE POSTMAN and MYRA BRECKINRIDGE. But yes, there are some movies that I know in my heart are not misunderstood, just plain irredeemable. There is no justification for them beyond the fact that I inexplicably like them, and the fact that I like them should make you lose all respect for me and my palate. Again, it goes back to the concept of neo-sincerity: I can easily point out all the faults, but I choose not to. And while some of them are well-known to you too, seeing as how I almost single-handedly put one back on the map (Thanks for nothing, ENTERTAINMENT WEEKLY!) and have been busy keeping a newer one in constant consciousness, I can't resist an opportunity to bear my tortured soul on a few other less familiar outings of the outre.

Again, in no particular order:

H.E.A.L.T.H.
Though Robert Altman was enormously adept at telling multiple stories that add up to one big story in film after film, sometimes he let his cleverness get ahead of entertainment. HEALTH was made at the end of what I like to call Altman's "Green Awning" period at 20th Century-Fox (named after a Mel Brooks riff about how when a director is hot, he could pitch a movie about just a green awning and producers will take it seriously), and was intended to be his big 1980 election satire, using the power-play for leadership of a health organization as extended metaphor for political dirty tricks. Or at least, that's what I've always taken from it; according to background actor Lary Crews, who served as Altman's assistant and typed the script for him, the story was constantly altered and changed by Altman and his collaborators under the influence of sandwiches and weed. Fox, naturally, found it so weird they buried it worse than they did IDIOCRACY; even when the studio released a purportedly complete box set of all their Altman movies on DVD, this was conspicuously left out.
It alternates between sledgehammer obviousness and obscuro minutiae (even I would have to say you must be really historically adept to get the fact that Lauren Bacall and Glenda Jackson's characters are meant to represent Dwight Eisenhower and Adlai Stevenson), and ultimately plays like one dip in the NASHVILLE pool too many. Still, though, I'm fond of it for its sheer audacity, and there are moments that I think really work. But this would be way low on the list of Altman movies that I would recommend to the novice viewer. 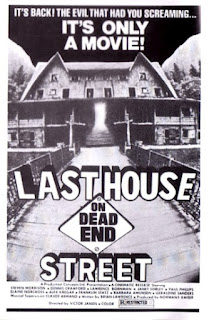 LAST HOUSE ON DEAD END STREET
This story about a pornographer who turns to snuff for bigger kicks is a humorless and grim exercise in nihilism chic, with all manner of graphic excess to try distracting you from the otherwise pointlessness of its existence. Yet somehow, it grabs me the way that my first viewing of R. Kern's shorts kept me in the room despite my repulsion. It's completely unpleasant, but it has a stench of authenticity that makes me compulsively respect it, as if Faye Dunaway's NETWORK wet dream came true and real psychopaths got hold of 16mm equipment and filmed their exploits. And if you consume the hard-to-find DVD's extras, you'll learn that indeed, the late director Roger Watkins had some serious issues. This falls under the category of "Movies That Will Get You Divorced and/or Lose You Custody of Your Kids." 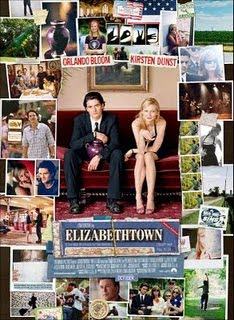 ELIZABETHTOWN
The movie that landed Cameron Crowe in director jail for almost a decade, which gave license to chuckleheads to piss and dismiss his catalog of lovably flawed protagonists and for satirists to suggest he should only make soundtrack albums...yes, it is an indulgent soup of overromaticised redemption. From the melodramatic set-up of Orlando's blunder, to the preciousness of the fourth act (when could Kirsten Dunst have all that time to make her customized road map and CDs?), even resorting to that horrid trope of every college sophomore's party-kitchen philosophizing, the question "But who are THEY?", indeed, after viewing ELIZABETHTOWN it is enough to make weaker souls take the baseball bat to Lloyd Dobler's boombox. But I loved every phony, hokey minute of it, as soon as that retro Paramount logo started the show. I wanted to live in that universe where losing a billion dollars could be sloughed off, where family quarrels could be peaceably resolved with a stand-up routine and a divided funeral, where you had time to drive across America and just look at stuff and listen to tunes, and yes, where a perky flight attendant knows all the deep album tracks and secrets of the heart. Really, it's biggest crime is that it's just too darned nice of a movie, and thus there's no suspense for the average viewer in seeing how it will turn out. Yet for me, on days where the world has been one big meanie to me, I go back to ELIZABETHTOWN and indulge in a little sugar. And yes, I bought both soundtrack albums too, because the Onion can snark all they want, but dammit Crowe makes good mix tapes. 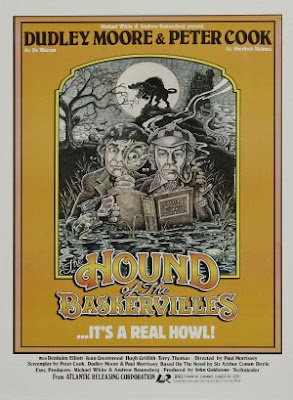 THE HOUND OF THE BASKERVILLES
There are few things more painful than truly funny people in the middle of a not very funny movie. And that's probably what fans of Peter Cook and Dudley Moore felt like watching them parody Sherlock Holmes, as director and former Warhol acolyte Paul Morrissey tried to continue the over-the-top antics of his surprisingly successful Dracula and Frankenstein film satires with Udo Kier. But I discovered this movie before I was even 13, when anything slightly resembling "adult" comedy was exciting, and if I loved the performer enough, I could convince myself anything they did was funny. Which is essentially what I did: I watched, listened, and memorized this movie and made myself love it. I suspect it's not the material in the movie but my memory of it and that time of my life that is triggering the laughter.
No, I take that back: Dudley playing Sherlock's phony-psychic mother as a hectoring yenta who keeps calling him "Sherl" is legitimately funny. "I've lost a medium; rare in a world in which the steaks are high."

And so, I stand before you with the evidence of my criminal diversions in full view. Launch whatever rejoinders you will. But keep in mind I have years of training in the art of dodging rocks and garbage.
Posted by Marc Edward Heuck at 6:33 AM