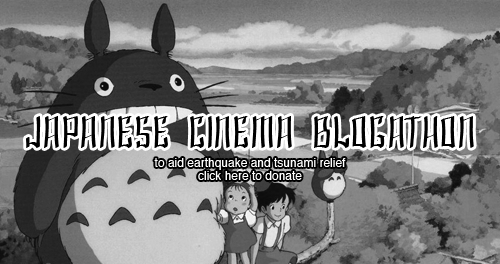 This is my under-the-wire contribution to the Japanese Cinema Blogathon To Aid Earthquake and Tsunami Relief, hosted by Japan Cinema and Cinema Fanatic. These wonderful bloggers, and their contributors, literally pulled together with barely two days notice to create this past week of scintillating reading to raise money for Japan's recovery. All these entry links are collected here, and, most importantly, you can make a donation by clicking on the banner above.

Note to the otaku: I'm sure I'm going to drive you nuts by referring to so much in this essay by the bowdlerized American terminology you've spent years correcting. But this is not a history lesson about the works themselves; there are literally dozens of better blogs and official websites to tell the truth about that. This is about my history with the works, when I didn't know what I know now about them. As such, I'm using the names by which I first experienced them and grew to love them.

It's 1979, and I'm in the fourth grade. I have already determined that I was going to have a career in movies. STAR WARS has made it that I'm eager to devour almost anything science-fiction related on film and television, though many times I'm looking more at the costumes and toys than paying attention to the storylines; I watched most of the first season of "BATTLESTAR GALACTICA" but I'd be hard-pressed to tell you what was happening on the show. Meanwhile, though, I'm still jonesing for the chance to take sick days, blow off school, and watch daytime TV: I consider it a rotten deal that so many good cartoons and game shows are being aired when I can't watch them.

And sure enough, I catch cold, and I'm out for almost a week. And amidst WXIX-19's normal lineup of Bugs Bunny, Popeye, and The Flintstones, they've added something new to me at 8:30 a.m.: "STAR BLAZERS."


And instantaneously, I can sense that this may be a cartoon, but this isn't kiddie fare. For starters, this is an adventure show, but it doesn't wrap up in a half hour like "JONNY QUEST" or "SUPERFRIENDS;" there's an ongoing story, like the old time serials my dad has told me about, or the soap operas that I tend to avoid. Something about Earth contaminated by radiation caused by an alien enemy, and a starship crew who must go an enormous distance in one earth year to find a cure AND defeat the would-be conquerers. An exciting storyline, but one that also infuriated me, because, well, sooner or later I was going to have to go back to school and I had no way to keep up with the story and find out how it would end. Videotaping was an expensive luxury reserved for important TV events, and I didn't know anyone who was going to be at home to watch the show and recap it. It was absolute dirty pool of Channel 19 to run such a demanding show for an audience eager to devour it in a timeslot that guaranteed they would be unable to watch it in sequence! I subsequently managed to catch isolated episodes over time through sick days and holidays, ultimately pieced together the important stuff, and it continued to reinforce my earlier appraisal that this was something special. Besides the ongoing threat of Earth succumbing to radiation, onboard the Argo there was the kind of adult romantic tension between hotshot captain Derek Wildstar and slinky, solemn nurse Nova that I was used to seeing on prime time, the so-called "spring water" the ship doctor was regularly drinking was definitely a potent potable, and most importantly, characters actually died! When I finally got to see the resolution of the first season (SPOILER: Earth survives), and learned that Captain Avatar, the gravelly commander in the opening and closing credits of each show, would not live to see Earth restored, and later would be accorded a very emotional funeral (this was a good 2 years before Spock would get his sendoff in STAR TREK II: THE WRATH OF KHAN), I was heartbroken, likely among many unprepared kids shocked and saddened at this turn.

Since I was already starting to pay attention to details like production companies and personnel, the building blocks of my Movie Geekdom, I looked carefully at the credits to this series. The syndicator, Claster Television, was familiar to me because I had seen their name on "ROMPER ROOM" and I had noticed they were an arm of Hasbro Toys. But what really caught my attention was that most of the names on the credit roll were Japanese...and that there was a screen reading:

My only previous exposure to Japanese-made programming was "SPEED RACER," which I had remembered loving as a pre-schooler but began to notice its limitations in animation quality. But there didn't seem to be any limitations here - the combination battleship/spaceship was elegant, the people were all attractive, and I was enjoying the gravity of the proceedings. As such, I was beginning to grasp that in Japan, animation was a much more serious business than it was here in the states.

A couple years pass. I'm now already in the thick of building my film knowledge base, and I'm heavily into Roger Corman's New World Pictures, because they're releasing all kinds of interesting stuff. Besides the horror movies that I'm still too chickenshit to watch, I see their name attached to great foreign films like CRIES AND WHISPERS and AMARCORD, rock movies like ROCK'N'ROLL HIGH SCHOOL and THE KIDS ARE ALRIGHT, silly kids stuff like SATURDAY THE 14TH and THE PRIVATE EYES, and, yes, cheap but cheerful space fluff like BATTLE BEYOND THE STARS; kids on the playground raved about George Peppard and his automatic whiskey belt.

Sneaking a look at my dad's ON-TV subscription TV channel one night, I see a trailer for an animated movie that I didn't recall playing Cincinnati - GALAXY EXPRESS. It promises the story of a boy traveling on a train that floats in space. But this is no Disneyesque romp: the boy is grim and determined, with a gun, looking for revenge. And he's in the company of an alluring and mysterious older blonde woman. And when it finishes, it has a New World Pictures byline on it. I determine that if New World is putting it out, it must be cool. But it would take me all the way to college before I would actually get a hold of a VHS copy and see it. 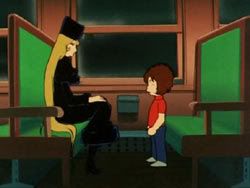 Even in the adult post-graduate status which I watch GALAXY EXPRESS, I react to it as if I were back in middle school, the same relative age as the movie's protagonist, the improbably named Joey Hannakannabobbakamanda Smith. I used to take holiday trips on Greyhound, often times alone, and watching Joey on a near-barren train stirs up the feelings of excitement and fear of traveling on my own like an grown-up. The weird convergence of childlike trust, sisterly affection, and buried attraction between Joey and his enigmatic guardian Maetel reminds me of how I felt towards older girls in my childhood. I find myself grimacing yet laughing at the same time at the ridiculous pseudo-John Wayne voice accorded to the arresting supporting character of space pirate Captain Warlock. At times I'm getting lost in the story, unable to keep track of everything, and having my rudimentary knowledge about Roger Corman, I suspect this has been radically edited from what the Japanese producers initially presented him. But I think IMDb user "perfectpawn" sums up the whole of my emotions as I watched the movie:

Well, I WAS a 7 year old kid when HBO played this movie in 1980 or so, and it disturbed the HELL out of me. I'd never seen things like this in a cartoon before -- the main kid's mom getting killed, female characters stripping down, the little kid getting the crap beat out of him by robot thugs, his mom mounted like a trophy in Mecha's throne room, the kid freaking out as he was about to be turned into a bolt(!), Maetel totally selling the kid out and then admitting that her body was once his mother's, and then that incredibly sad ending as she left on the Galaxy Express and told the kid she'd only live on in his memories.

Oh yeah, that ending. After all that's happened between Joey and Maetel, the fact that he ends his journey having avenged his mother but losing his soul mate made me as misty-eyed as when Charlotte spun her last web.

I'm not going to bother trying to explain what I have learned in the decades since then about the true origins and expanse of the universes of what should properly be known as "SPACE CRUISER YAMATO" and "GALAXY EXPRESS 999." If you google or wiki those titles, you'll learn the meat about why they're so great and continue to amass huge amounts of fans to this day. I will say that SyFy channel has made an excellent decision in choosing to rebroadcast the first season of "STAR BLAZERS" this April, and that you can also go to Hulu and see the proper 100+ episodes of "GALAXY EXPRESS 999" without the truncation or bad dubbing and get caught up in it.

These two pieces of what was being called "Japanimation" back then, and "anime" today, discovered in childhood, even while watching one in, at best, arrested adolescence, using the medium of cartoons which had otherwise been a source of happy-minded distraction, sent a message to me. These animated creations did not talk down to young Marc Edward Heuck, no matter how much doctoring the American producers may have done to make them kid-friendly. They were straightforward about unpleasant subjects like doom, emnity, isolation, abandonment, betrayal, death, and uncertainty about the future, because even if they had the impact of a falling pallet of bricks to my soul, it was as if the artists felt I was mature enough to withstand the hurt, learn from it, and recover to become stronger afterwards.

Somehow, I think that's an appropriate message coming from the country of Japan.

And that's why I'm donating. Not just out of charity, but out of thanks for the life lessons...and the animation. Please give too.
Posted by Marc Edward Heuck at 5:29 AM