You Better Watch Out for a Football Hero 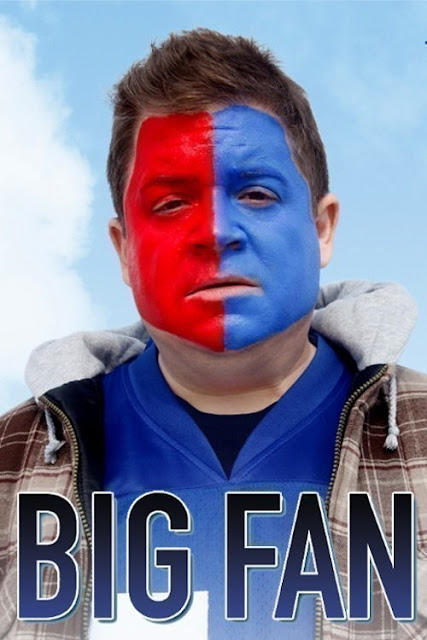 To mark today's DVD release of THE WRESTLER screenwriter Robert Siegel's directorial debut, BIG FAN, rather than write just a standard review of the film (in brief, I loved it), what I would really like to do is make some bullet point comparisons to another film which to me is its solid spiritual cousin.

In many interviews for the film, both Siegel and star Patton Oswalt mention their deep appreciation for character-driven dramas of the '70's and how they informed the creation of this film. That was a period where you could make a movie involving a somewhat unpalatable protagonist and yet maintain audience interest and curiosity, without having to provide sympathetic backstory or contrived redemption. Oswalt's performance as the impoverished, put-upon football fan Paul Aufiero is right at home in that template. However, while the most likely spiritual cousin people would summon up would be Travis Bickle in TAXI DRIVER, a character ironically himself informed by John Wayne as Ethan Edwards in THE SEARCHERS, both of them archetypical God's Lonely Men, there is actually a more appropriate subset personality that is Paul's true doppelganger.

What separates Paul from Travis, or for that matter the Travis-inspired protagonists of his creator Paul Schrader (Richard Gere in AMERICAN GIGOLO, Willem Dafoe in LIGHT SLEEPER), is that these are men who are missing that certain something they think will complete them, and spend their lives awkwardly trying to find it. Paul Aufiero, on the contrary, has found that something - love of football and the New York Giants - and just wants to be left alone to enjoy it, but so-called "normal" society disapproves and robs him of that small pleasure, and he retaliates with dangerous behavior. In 1980, writer/director Lewis Jackson presented a similar misfit named Harry Stadling, played by former "SESAME STREET" alumnus Brandon Maggart, whose singular obsession is not football but Christmas, in the darkly comic horror film YOU BETTER WATCH OUT, better known to most fans as CHRISTMAS EVIL. 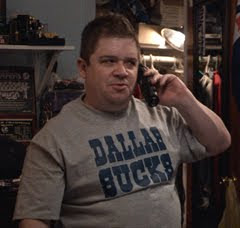 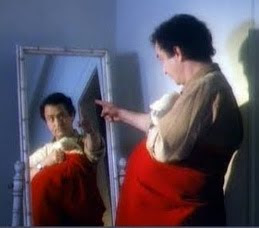 Both Paul and Harry are working class moaxes in the Eastern Tri-State area, Paul a garage attendant, Harry working in a toy factory, living in squalor with few friends and the scorn of their families. Their free time is completely devoted to their life's work: Paul watches his Giants on TV and scripts what he feels will be witty banter for his favorite radio sports program, Harry collects Christmas tchotchkes and keeps a big book on who the good and bad children are in his neighborhood. For the initial setup of each story, these men are content with their otherwise humble lot in life. Patton Oswalt observed that Paul is a character who fears change - he only likes one team, one topping on pizza, and one kind of soda. However, it could also be said that rather than fearing change, Paul craves simplicity: he has his mantras, why is there a need for any alternates. Same for Harry, especially since he identifies so much with a man who practices simple justice - good kids get toys, bad kids get bad things.

We are allowed some backstory with Harry - watching his mother engage in foreplay with "Santa Claus" as a child, i.e. disrespecting what the holiday represents to the faithful, has made him determined to keep Christmas sacred. Meanwhile we don't know how Paul reached his plateau, but the presence of a nattering mother and the absence of a father suggest a climate of emotional castration where his retreat into football lore allows him to feel like an alpha male. And the viewer can see seeds of how these characters will lose touch with propriety: Harry has already taken to spooking "bad" children through stalking their homes, and Paul makes an ill-informed decision to follow his favorite player one night. 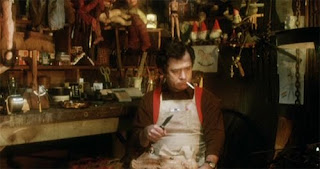 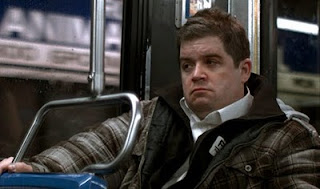 Harry's break with reality is more abstract, based in anger at fellow employees who abuse his generosity, discovering his company's charity toy drive is just a p.r. front and no toys will actually go to poor children, his deteriorating relationship with his brother, and his general observation that no one is properly judging right and wrong as his beloved Saint is charged with doing. Paul suffers an even greater fall: through the machinations of his greedy brother, hectoring mother, and a constant radio antagonist called Philadelphia Phil, both he and his beloved Giants hit bottom - they lose games, Paul loses his radio outlet. Both men are told these measures are for their own good, to force them to live in the real world, a place that has no charm for them. And thus they make their stand to get their private paradise back. 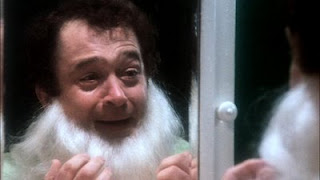 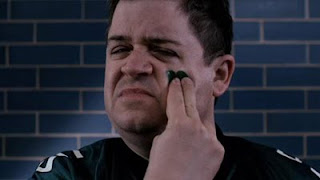 Some minor spoilers here
What is particularly interesting about these men's quests for retribution is that they are offered a moment where they could find sanctuary and redemption. During Harry's bipolar Christmas Eve rampage dressed up as Santa Claus, he stumbles into a random party of strangers where he is eagerly welcomed: the parents bring out their children to meet him, he is given rich food and drink, pretty ladies dance with him. Paul travels to an out-of-town sports bar in Philadelphia Eagles makeup to find and confront his on-air nemesis Phil, and though Phil is indeed every bit the crass blowhard in person as on the show, he is also genial to Paul during their initial meet: he buys him beers, gives him bro-hugs during touchdowns. Indeed, all the Eagles fans greet the stranger Paul with open arms. Away from the persecutors who know them too well, Harry and Paul could easily start over and become accepted by new people and escape from their pain. But in their minds, they both have tasks that must be completed. Christmas and the Giants are ultimately more important to them than their own lives, and they are willing to pay that price.

YOU BETTER WATCH OUT/CHRISTMAS EVIL suffered from poor distribution and bootlegging for many years, until iconic director John Waters proclaimed it his favorite Christmas movie and helped create a climate for its creator Jackson to reclaim it and put it on DVD. As such, it is unlikely that it ever had any direct influence on any of the talent involved with BIG FAN, though I would be pleasantly surprised and somewhat not surprised if either Siegel or Oswalt were to acknowledge it. Both films are terrific character studies with mordant humor and legitimate pathos, and even if you hate both the holidays and pro sports, they are required viewing.
Posted by Marc Edward Heuck at 2:30 PM