Karping over Kevin and Kops 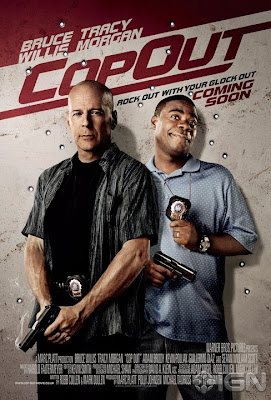 "When the instinctive question about a person is, What is he doing? it is felt that he will be found to be, like most of us, doing nothing in particular. There is an indefinite sense that he must be invading some region of singularity, good or bad. The devout hope is that he is doing well. The secret faith is that he is making a mess of it." -- Thomas Hardy, THE RETURN OF THE NATIVE

There should be a genial air of fun to accompany the opening weekend of a new comedy, especially one directed by one of the standout talents of the mid-'90's. But it seems whoever I talk to, whatever I read, both Kevin Smith and his new movie COP OUT are being greeted with as much enthusiasm as the opening of a Hustler bookstore in downtown Cincinnati.

I'm not interested in trying to recap for you all the events of the last couple weeks involving Smith; provided you have not already been inundated by internet reports and links sent by your friends at your social networking sites, you can always Google it yourself. This extended piece by Patrick Goldstein is probably the best breakdown though. I am interested in, and frankly troubled by, the nastiness being leveled at Smith by his former demographic - young, media-savvy, wiseacre males. While Smith has, I think, wisely decided to confine his ranting about his misfortune to Twitter, YouTube, and his regular SModcast, where it can easily be avoided by uninterested parties, that is not enough for these Z-Boys of the Internet Tubes; go to any gossip or snark-humor site, and there is bound to be an article on the "wealthy fatso crybaby" who needs to shut up. I don't think Smith needs me to defend him in this matter; I'll simply state that, as two-time collaborator Chris Rock would say, Kevin Smith is rich, the people who finance his movies are wealthy, and if any of these dart-throwers ever had a close friend or relative with weight problems who were arbitrarily singled out for punitive action and given contradictory doubletalk as a justification by any major corporation, they'd find the empathy they are sorely lacking right now. Much has also been made about an ongoing series of Tweets from Smith reacting to early negative reviews of his new film. Granted, Smith has always had a sense of playful banter regarding his negative reviews: much like myself, he has been amused at the colorful (or conversely uncreative) ways people find to disparage his work. I will agree that this time out, there is a disturbing desparation in this series of responses, less joking and more defensiveness in his words. However, I feel a certain sympathy nonetheless. Despite the professed unambitiousness of the film itself, COP OUT is in a sense the most important movie that Kevin Smith has made in his career. It's not like the old days when, say, JERSEY GIRL got razzed and barely broke even, and his longtime benefactors Harvey and Bob Weinstein would just pat him on the back and say "better luck next time" as they mulled over their next project; the brothers are broke and Smith has to go to the market where lies are bought like everyone else. He is in a sense like many other breadwinners in this bad economy, looking for constant work in a near-Depression, compounded by being in an environment where, when rumors surface that Brian DePalma would direct the PARANORMAL ACTIVITY sequel, they are taken seriously and not automatically ridiculed. As much as his sour detractors would love for him to move back to Red Bank and become a furze-cutter, his wife and daughter have established lives and friendships in the city of Burbank. And much like Bruce Willis' protagonist in COP OUT, or more likely, Smith's beloved postal worker father now deceased, he is determined to provide his family whatever they want. So I can see how he may feel a little defensive right now - the constant Tweets are a touch reactionary, but if your job could be lost because of some guys who have no experience doing what you do firing cheap shots, you'd be a little jumpy too.

But I come to share happier thoughts. First off, I enjoyed COP OUT. It is a trifle to be sure - a tongue-in-cheek love letter to '80's buddy-cop-movie excess (right down to it's Eurotronic Harold Faltermeyer score and it's MTV hit parade song cues) with a healthy helping of FREEBIE AND THE BEAN redux, which still lacks the extra level of lunacy found in Edgar Wright's HOT FUZZ - but I had a large grin on my face the whole time. Besides the reliable wavering amusement and annoyance of Willis and the trademark derangement of Morgan, I particularly enjoyed the backup from ersatz nemesies Kevin Pollack and Adam Brody, who constantly conport themselves as if they are starring in their own buddy-cop movie, one of the flourishes in this script that both tweak and revel in the cliches inherent within the genre. From my vantage, it proves that Smith has the ability to mesh his signature goofiness with someone else's ideas and adhere to John L. Sullivan's mandate to make people laugh and forget a while.
In the closing credits to MALLRATS, Smith thanked John Landis "for giving me something to do throughout my youth on Friday nights." COP OUT is Smith's amiable repaying of the favor; Mr. Landis should be most pleased.

And today's new release gives me an excuse to repost this 2004 account of my Q&A with Smith on the 10th Anniversary of CLERKS; after the success of a 2003 mutual appearance, he graciously agreed to sit for a formal interview. Sadly, there has been no footage found yet from this session - Miramax chose to tape a different Q&A at the Arclight for the CLERKS X DVD - but there are highlights in the piece, and I think the caption on this picture is a nice compliment. I'm sorry for the dark quality of the image, and I guess you'll have to click on it to actually read the caption. 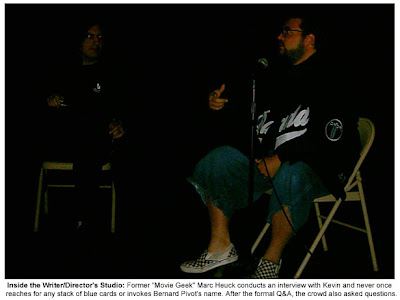 Posted by Marc Edward Heuck at 7:50 AM