Today marks the birthday of one of the best filmmakers you've never heard of. A woman whose single feature film can be considered responsible for the elevation of our current President. And, in full disclosure, a close friend, though I will swear on a stack of Roger Ebert Movie Home Companions there is no cronyism in my praise. That being said, it is still a thrill for me when I can look at someone who is enormously talented, be they a writer, musician, painter, or filmmaker, and then consider that I am someone they like to keep company with. So when I can write something that serves as both critical assessment and a Happy Birthday greeting, it's a nice convergence.

When I took part in one of those "Top 5" polls with the Living Social application on a social networking site, when it came time to picking Top 5 Favorite Directors, it was easy: Martin Scorsese, Quentin Tarantino, Dario Argento, Tamara Hernandez, and Guillermo Del Toro. The only hard part was that I had to find and add a photo of Ms. Hernandez to their database. This was the only headshot I could find online.

In the fall of 1999, as I was still taking my baby steps in Hollywood, a chance encounter at a Russ Meyer restrospective at the American Cinematheque yielded me an invitation to the premiere party and screening the following week for a new film called MEN CRY BULLETS. The ad campaign on the postcard looked intriguing, but a little desperate in playing up the quirk - "In a world where men who wear diapers fear Betty Page vipers" sounded just a little too clever. But it was a premiere and I wanted to meet interesting people, so I made plans to attend.

At the pre-screening party, everyone I spoke to was pleasant, no douchebags that I can remember, and I got a little bit of face time with Ms. Hernandez. I also got a look at the trailer prepared for the film, and got a little nervous - again, it was hammering the quirk way too hard. If you've endured the attempts at "hip" cinema since the late '80's, you'll know that when filmmakers throw in weird for weird's sake, it's usually not effective; it has to come from some place of sincerity on the artist's behalf. It's funny when John Waters puts strange things on screen because he lives that life, it's funny when Russ Meyer puts large chested women spouting political diatribes on screen because that is his worldview, but it's not funny when some film school brat tries to copy those formulas because chances are they're just a tourist in Wackyland who only want the million bucks and not the last dodo. Thus I was concerned about the film I was going to see, worrying that I'd have to make one of those vague compliments afterward that one always does when a friend creates something you don't like. (Orson Welles' perfected response for such occasions: "There are no words...") But soon the witching hour came, and we all trekked to the Sunset 5 for the big midnight show debut.

My mood began to perk up when I watched the short film by Ms. Hernandez that preceded the feature, THE SLAP, a decidedly different portrayal of two '50's-era teenagers parking out on a moonlit night. It was a funny short, but there was a gravity to it all - this was not some mugfest sketch from The Groundlings, this was really looking at what it would be like if someone of another era decided to be upfront about liking things a little bit rougher. I was suitably impressed.

To my enormous pleasure, my fears about MEN CRY BULLETS were completely wrong. As the movie unfolded, I felt like I was in capable and original hands. No mistake, this was a weird movie about strange people, but it was coming from a grounded and sincere place where this sort of behavior felt real and not just a contrivance. I felt like Ms. Hernandez knew these people and cared for them. Most importantly, I saw no influences or homages - there was no wink wink nudge nudge to other movies or cultural artifacts, as opposed to too many other post-modern post-Tarantino directors of the day. I was in a wholly original and particular universe - Tamaraland - and it was a rough visit, but I was excited to have been there. I eagerly gushed to Ms. Hernandez afterward about how much I loved the movie, and the following week, when it had another midnight show, I eagerly stood outside the theatre trying to entice anyone wandering by to take a chance and buy a ticket to the film.

As I stated at that moment in time, on intarweb podcasts, and probably to my dying day, when I saw MEN CRY BULLETS, I felt I was looking at one of the best new directors in town, and had the same excitement that occurred when Ebert saw Scorsese's first film. Appropriately, Roger Ebert was one of the most important critics to give MEN CRY BULLETS a rave; though he never wrote a printed review of it for the Sun-Times, on a post-Siskel episode of his TV show devoted to fringe cinema with guest critic Harry Knowles, he stated that it deserved to be a cult film of the future. Unfortunately for Ms. Hernandez, that was one of the few positive reviews the movie got. To this day, it carries a Metacritic score of 32 with 10 critics surveyed, and a Tomatometer score of 44% with 9 critics surveyed. Two people I asked to review the movie as a favor wound up disliking it, albeit in a respectful manner. I don't want to glorify some of the peculiarly nasty remarks made about the movie and about her, suffice to say I smelled the same kind of casual misogyny that has been leveled at Sofia Coppola, Diablo Cody, and other female hyphenates in the last decade. The film was not a success - after a few scattered playdates in the major markets, it vanished and has had little to no revival since in any media.

What was a success, on a personal level, was my friendship with Tamara. About a couple months after the closing of her film, we impulsively went to an opening night screening of the patently ridiculous sci-fi blunder SUPERNOVA with James Spader, and it was one of the funniest evenings of my life; as we traded barbs about the movie, and I provided all the insider baseball details of the rotating directors and the cost overruns, she muttered, "Do you know how many movies I could have made with that budget?" She willingly decided to give me my first big break as a film historian by allowing me to moderate her commentary track for the MEN CRY BULLETS DVD, which is now extremely out of print and fetching three times its original SRP in some collector circles. I have been privileged to be witness and confidante to many important parts of her life, from the struggle to launch another project, to the joy of her marriage with writer/director Tom Stern and the birth of their children. We've never had to lie or sugarcoat to each other - she's taken my film scripts to task and I've put in my two cents on her ideas. You don't have to like someone's art to be their friend - it just happens to be a happy accident that in this case, I do.

Oh, and about that tease up front about how MEN CRY BULLETS changed history? At the time of filming, co-star and partial producer Jeri Ryan's then-husband Jack was an investment banker who privately threw in some money to keep the financially strapped project afloat. According to producer Harry Ralston, while their politics clashed, they had gotten along well. In 2004, five years divorced from Jeri, Jack Ryan was the Republican front-runner for an open seat in the U.S. Congress, and both press organizations and some of his opponents in both the Republican and Democratic camps were asking to have their sealed divorce records made public. Despite the protestations of Jack, Jeri, and even his Democratic challenger Barack Obama, a judge unsealed the records, and it was revealed that besides his indirect involvement in what was described by the Daily Herald as "a movie featuring rape, nudity, implied three-way sex and a woman killing a pet pig with an ax," Jeri had cited Jack's interest in non-vanilla sexual behavior as grounds for their split. The bad publicity and pressure from the GOP was too much, and Ryan withdrew from the race, replaced by last-minute residential transplant Alan Keyes. Obama trounced Keyes 70% to 27%. And the rest is on the History Channel after the WWII docco.
So okay, maybe it was more Jack Ryan's carelessness than Tamara's vision that changed the political landscape. I'm not the first person to print the legend.

A long time ago, I once got an email from Tamara informing me that she was moving from her longtime apartment. By one of those strange internet vagaries, the email was dated 8/19/2040. So it has always stood at the top of my inbox for years since. Which I consider a handy reminder that I should never stay out of contact with her too long. If we both actually make it to 2040, we'll both be in our 70's.

Here's to growing old with you, Tamara! 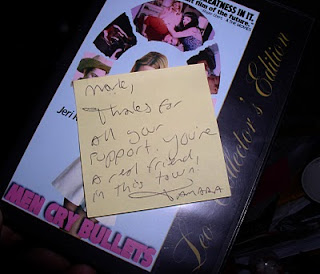 Posted by Marc Edward Heuck at 7:00 AM