My longtime friend Laura Majeski, who among her real world achievements in chemical and biological science, also managed to take a previously moribund fan community for my former game show and turned into a Dadaesque Wackyland of fanfic, slashfic, and whatthefic, complete with its own language, is easily the world's biggest Robert Downey Jr. fan. Each day she presents a "Daily Gorgeous" with which to inspire the world, and she's so far amassed over 1400 images, so that's a lot of gorgeous.

Amusement aside, right now, what is not to love about Robert Downey Jr.? He's always been an irresistable presence on film, not just going back to his teen idol years but even further with tiny cameos in the early films of his father. His brief moments of screen time in POUND and the just-reissued-to-DVD GREASER'S PALACE are not only retroactively cute but unnervingly effective within the context of how he is presented. After a long period where he seemed to be mired in the swamp of addictive behavior and tabloid headlines, he has succeeded in maintaining a healthy personal life and a genial public profile without any sort of heavy-handed hairshirt wearing. And best of all, he has demonstrated an ability to be both a headlining actor that can open a movie, and a team player that will gladly take secondary roles and generously share focus with his higher-billed co-stars.

It is his two hit movies of this year onto which I would like to put the deeper vision today, especially since most would say claim there is not much depth to them upon the first viewing. But upon some stewing, together they make an interesting statement about him and this stage of his life. Seeing how his father cheekily credited himself as Robert Downey Sr. (A Prince), it is readily apparent that this Son of A Prince is quite ready to become a King. 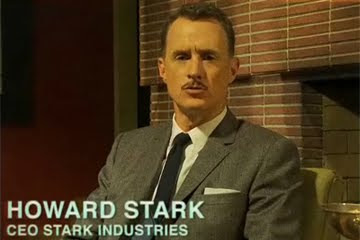 While most people who watched IRON MAN 2 this past summer enjoyed it and forgot about it, since it didn't have quite the impact of the first installment nor ratcheted up the stakes of its ongoing story like THE DARK KNIGHT, some took note of various themes presented in the film. Obviously, there is the ongoing linkage to upcoming Marvel-produced films, with introductions to characters and elements to be featured in THOR, CAPTAIN AMERICA, and THE AVENGERS. And Tony Stark's inventor father Howard and his "Stark Expo" diorama (not to mention the pencil moustache used by actor John Slattery) certainly made many people think of Walt Disney, including my blogger friend Carla Regina at Popspiracy, especially ironic as during production of the film Disney spent a fortune to purchase the Marvel Comics empire. But what few seem to have paid attention to is what is likely a very personal convergence of themes for Downey - the notion of surpassing your parent's success. Tony Stark, in both films, spends much time pressured by the shadow of his late father, and feeling that at best he was an afterthought, that he was treated as more like a corporate successor to the company and not so much as a son. It is what fuels his hedonism, his workaholic and alcoholic tendencies, though he still feels that he won't live up to the legacy. But in the archival footage of Howard Stark left to him by Nick Fury, Howard directly addresses Tony posthumously to not just assure him of his love, or to profess his confidence in his son's talent, but to suggest he is counting on Tony to use the means of science that are not available in Howard's lifetime to overtake him. In short, his father actively believes and hopes that his son will become more successful than him. 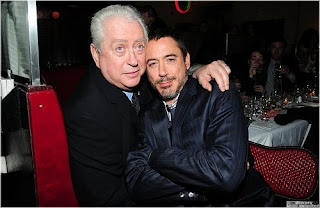 Similarly, Robert Downey Jr. has had a trying relationship with his own father. While they have collaborated frequently, with the younger appearing in seven of the elder's features (albeit three in childhood), he has also held him responsible for introducing him to the drugs that fueled his longtime substance addiction, and it stands to reason that financing for those latter-day films (Sr. has not directed a narrative feature since 1997's HUGO POOL) was contingent upon getting his services, suggesting an uneven dynamic. The stage manager on my former TV show was a longtime employee of Chuck Barris, and told us of an occasion when, during the making of THE GONG SHOW MOVIE, on which Barris collaborated with Downey Sr., he was asked to spend a Saturday morning helping a teenaged Downey Jr. move out of his father's house after a particularly large quarrel. As such, one can imagine Robert taking extra notice as a struggling son of a large-looming father playing the struggling son of a large-looming father, and through that making peace with the fact that yes, he has surpassed his predecessor in the public sphere, and that it is not only acceptable, but the deep-seated wishes of his parent. 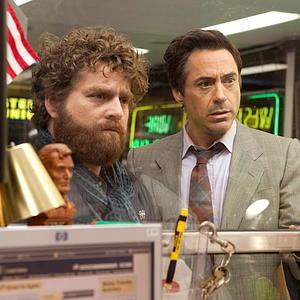 Moving on to this past November's DUE DATE, the mixed receptions this film has received from critics and viewers alike indicate that in all likelihood, the majority of people who have seen this film have not caught on to what this movie is really about. Most have dismissed it as a wannabe-meaner rehash of John Hughes' legitimate masterpiece PLANES, TRAINS, AND AUTOMOBILES, merely because both films involve two fractious strangers traveling cross-country to meet a deadline with the main character being an orderly type forced to endure a more slovenly companion. But while the older film is concerned with getting past outward appearances to find mutual compassion, the latter film has a different angle, one that, admittedly, does not fully make itself known up front; it took me nearly to the end before it hit me.

I find it odd that WB released DUE DATE just after its bland and formulaic "sudden-parenting" comedy LIFE AS WE KNOW IT, because this film is in fact the smarter, cleverer, and funnier primer on that concept. Consider that Downey's Peter Highman is in a rush to reach the West Coast in order to be present for the birth of his first child, yet his mannerisms - impatience (especially with other children), prim sarcasm, trying to turn things his way with money, and an instinct to abandon problems - indicate that he is not an ideal candidate for fatherhood. Zach Galifianakis' Ethan Chase, meanwhile, is traveling West to disburse the ashes of his dead father, and exhibits the traits of what we would traditionally call a manchild - blind adherence to institutional rules, need for immediate gratification, indulgence of a pet, asking dozens of random questions, imprudent behavior, low common denominator taste, wild mood swings, and a comical yet sincere attachment to his deceased parent.

In short, the road trip and the comedy therein is designed not to explore traditional male bonding, but to present expectant father Peter with almost every nightmare scenario that his future child could conjure up, and see how he will deal with it. From small things like annoying conversations, bad judgment calls, and unrealistic career goals, to legitimately giant messes like misstatements that get them kicked off a plane, and wrecking their rental car, Ethan is not only testing Peter's mettle for enduring disaster, but his capacity for forgiveness and understanding, the qualities that he is going to need in order to be a good father. The surprise revelation that Ethan serves near the end, which could easily be the last straw for their relationship, reminded me of a story I once read in the L.A. Times about an adopted child so fearful of being rejected by the family that took her in that she would often commit increasingly dangerous acts, as a "test" to see if they would still keep her or give her back to the state; while his character is not consciously pursuing the same goals with Peter, there is still the fearful undertone of, "Will you still love me if I tell you..." in his manner. Having lost his real father, and obviously so socially maladept that he has few friends, Peter is the sensible adult that at this moment of loneliness Ethan desperately wants to cling to. And in turn, Ethan is hardly the person Peter would ever want to be around, but as he spends more time with him, despite the exasperation he feels at his every blunder, he does develop a sense of responsibility and protection for him.

Again, this role likely holds some special meaning for Downey on both ends of the parental spectrum. He became a father at age 28 to Indio Downey, and it was early in Indio's childhood that his substance abuse began to reach crisis levels, to the point where his first wife Deborah Falconer left him and suspended access to their son in 2001. From all public appearances today, the two men now enjoy a healthy relationship. As such, between the years of bad behavior, and his period of rehabilitation and healing behavior, Downey had a large reservoir to draw from to shape a character like Peter, who begins the movie thinking first of his own needs and of children in the abstract, and through harsh adversity learns to take care of others and provide patience and forgiveness, things that Downey in his troubled years desperately sought.

Not many people in the world, let alone in show business, are able to make the turnaround in their lives and personal fortune that Robert Downey Jr. has achieved. So there is a little extra pleasure in seeing him not only prosper, but take those low points and use them in the creation of great entertainment. Perhaps that's why he has reached this all-time-high of moviegoing affection, and will certainly maintain it for a long time to come; if he can go from punchline to paragon, there's no reason any of us can't either.
Posted by Marc Edward Heuck at 4:00 AM