"Satan's boy I could never be. I haven't the humility."

A couple years ago, as I was in conference with a booker for one of the most prestigious theatre chains in America, discussing the climate for midnight movies and the titles that are performing best, we mused upon how one of our favorite filmmakers, and our favorite film of his, seems to have been abandoned by the upcoming generation. 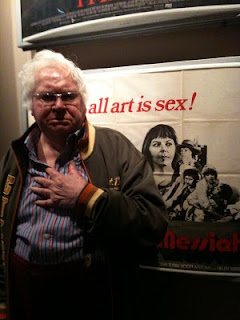 Love him or hate him, Ken Russell was a director whom throughout the '70's and '80's one could not ignore. While there were plenty of directors in that decade who "pushed the envelope," it seemed he was always trying to rip the damned envelope wide open; I always liked to joke that he and Nicolas Roeg were part of an elite group to whom presidents of major studios would grant multi-million dollar movie projects, knowing full well they would get drugged out of their minds before shooting a frame. Russell was a one-man cult movie staple: if you operated a repertory house, you could double feature any of his movies and be guaranteed a crowd. He loved playing with that camera...and with us. Among his achievements:

His adaptation of D.H. Lawrence's WOMEN IN LOVE provided what is still the "twi-night double header" of male nudity in the naked wrestling match between Oliver Reed and Alan Bates;
THE MUSIC LOVERS was an over-the-top biography that nonetheless chipped away at the wall surrounding the homosexuality of Tchaikovsky...and the well-closeted actor portraying him, Richard Chamberlain;
Those gleefully garish musicals...THE BOYFRIEND, TOMMY, LISZTOMANIA...all carrying the same single-minded vision that for me makes THE APPLE so much more entertaining than CHICAGO or RENT;
A sojourn at tight-fisted (and short-lived) indie Vestron Pictures still yielded a slate of diverse and good-looking films - GOTHIC, LAIR OF THE WHITE WORM, SALOME'S LAST DANCE, and THE RAINBOW;
And even the most un-cinesatically-inclined philistine reading this essay has surely caught a late-night HBO broadcast of ALTERED STATES...or at least '80's popsters a-ha's blatant ripoff of the film's payoff scene in their "Take On Me" music video.

But it's safe to say that if there's a movie to put on his tombstone, it's the one that we both loved, and which even today, is a lightning rod for trouble. 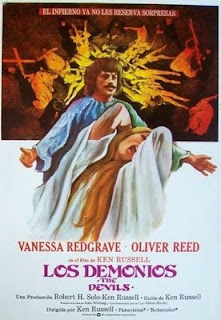 It's THE DEVILS, very loosely adapted from Aldous Huxley's THE DEVILS OF LOUDUN, itself a liberally embellished account of an actual incident involving religious fanaticism and political dirty tricks. When they talk about movies that "they don't make like that anymore," this is the template. The booker and I remembered how as children, we were fascinated by what it promised with its initial X rating and the lurid advertisements promoting it, back when someone could call a movie "controversial" and it wasn't just astroturfed advertising agency bullshit. I finally saw it at the 1991 installment of Columbus, Ohio's then 24-hr horror marathon NIGHT OF THE LIVING DREXEL, in the middle of the night, sitting next to RE-ANIMATOR director Stuart Gordon, and it was a revelation. A nonstop assault of sex, sacrilege, and hysteria, it left the normally loudmouthed marathon crowd in stunned silence.

So why don't you know the film?

Well, for starters, Warner Bros. has been treating this movie like an autistic Kennedy for over a decade. Previously, in the '70's, they eagerly reissued it constantly, most memorably after the smash of THE EXORCIST ("Prepare yourself for THE EXORCIST with THE DEVILS" said the ads). It was released on VHS in the '80's with no negative pushback from any detractors. But I can only surmise that around the mid-90's, amidst the ridiculous Ice-T/Body Count/"Cop Killer" fracas at WB's then-sister record label, the corporate powers made an edict of refusing to release any NC-17 rated fare in any fashion. And for years, they stuck to that decision, derailing and almost cancelling initially planned director's cut releases of Peckinpah's THE WILD BUNCH and Oliver Stone's NATURAL BORN KILLERS, and forcing the digital softening of Stanley Kubrick's EYES WIDE SHUT for its initial release. To their credit, in subsequent years, WB has amended that stance, and all these films have been released to DVD in the uncut versions that were previously unapproved. Yet in 2008, when the studio first teased that there would finally be a DVD release for THE DEVILS, leaking a May 20th release date, new cover art, and a mouth-watering 111-minute running time (making it the longest cut ever made public), just as quickly the artwork was yanked and WB denied there was any release forthcoming. 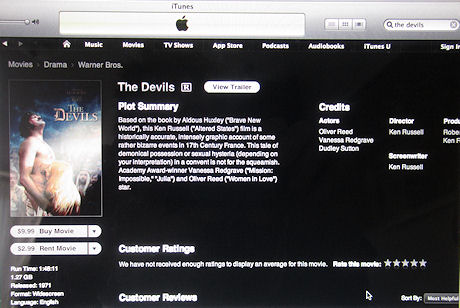 More recently, the studio's continued hate-on for the film manifested itself in a bizarre digital drama this past weekend. On Friday the 18th, with no advance word, THE DEVILS was made available exclusively for streaming and downloading on iTunes, in its standard U.S. 108 minute cut, presented for the first time in any home viewing medium in its proper 2.35 scope ratio. After excited reactions from fans were posted to message boards and blogs, and some entertainment press figures began to ask more questions (Will there be a DVD? What of the 111-minute version previously announced? Why was it cancelled previously?), the movie was removed from sale at iTunes on Monday afternoon. Its availability lasted less than 72 hours!

The most distressing problem surrounding the film is not only that THE DEVILS has never gotten a DVD release anywhere in the world, but that, with little exception, it has been increasingly suppressed by WB in other media. It is not available for booking in revival theatres; my booker friend has offered repeatedly to guarantee midnight bookings in all his midnight movie-running theatres if they would strike a new print of the movie - WB in turn has repeatedly said no. (A few screenings in non-profit venues such as the American Cinematheque have materialized, but very rarely) To date, there have been no U.S. cable or pay-TV airings in over a decade. When critic and historian Mark Kermode (who made the excellent "THE FEAR OF GOD" documentary on THE EXORCIST for its DVD) found the long-lost footage cut from all prints, including a now-legendary scene nicknamed "The Rape of Christ" (involving the "posessed" nuns ravishing a crucifix contrasted with flawed priest Grandier performing a solemn communion rite elsewhere), WB initially refused to allow him to include the material in a UK TV documentary on the film titled "HELL ON EARTH." After wrangling, WB relented, but would only allow the scene and documentary to be run once, and initially tried to bar the use of sound in the clip, as if fearing intrepid viewers would tape it, digitally insert it into existing dupes of the movie, and start bootlegging it. Of course, their fears were correct: a bootleg label named Angel Digital did just that, offering an "uncut" DVD of the film where the bulk of the film was taken from a cropped 1.85 UK broadcast with the deleted footage spliced in. The "Hell on Earth" docco can be found in segments on YouTube, and as a "bonus" on the bootleg DVD. And a recent TV profile on co-star Vanessa Redgrave was unable to use any footage from the movie, despite it being one of her best-known and acclaimed performances.

Add to all of the above the recent not-under-the-radar-enough iTunes smackdown, and one gets the impression they really don't want you to see this movie.

Conspiracy theories abound as to the source of all this suppression. Ken Russell himself is a mercurial personality, as witnessed just a few weeks ago by his massive taking-the-piss during a 35th Anniversary screening of TOMMY at the Academy of Motion Picture Arts and Sciences, and indeed, except for ALTERED STATES, none of the films he has directed that are owned by WB have seen DVD release in America, so there could easily be longtime grudges being applied in Burbank; '70's-era WB head John Calley was obviously a fan of his, but current chief Alan Horn is surely less enthralled with such antics. Producer Robert H. Solo once remarked to Video Watchdog publisher Tim Lucas that THE DEVILS did not start turning a profit for WB until the early '90's, so there is also possibly lingering resentment over the headaches the film has caused versus the money it has brought in. That bad ratio perhaps lays heavy with the home video department today as we speak; they have probably done the math and found that the expected amount of sales it would achieve in this down-market for catalog DVDs would be small, but the opportunity for Katholic kook William Donohue and other religious rabble-rousers to drum up media coverage for their outrage and a boycott threat would be large. And in fairness, that may have been of little worry to '70's-era WB, who just had their studio and their record company, but the media giant that Time Warner is today - encompassing CNN, magazine publishing, theme parks, etc - does have to worry about how the activity of one division can negatively impact the entire family of companies. I disagree with this kind of Nervous Nellie behavior, but I can understand it.

What makes the story sad for us is that perhaps if WB did relent, it could be of no avail. I have personally witnessed extremely poor turnouts at late show screenings of former midnight-show heavyweights like PERFORMANCE and PINK FLAMINGOS, suggesting that a spirit of adventure has left the midnight movie crowds of today. They don't want to brave the challenges of former greats like DON'T LOOK NOW or EL TOPO; at best, they'll take in works like CLOCKWORK ORANGE that have achieved mainstream acceptance, or more often, they want the familiar comforts of fluff like THE GOONIES or DONNIE DARKO. (Look kids, I love the movie too, but it's just "An Occurrence at Owl Creek Bridge" with an MTV score, it's not that innovative.) Whether WB's reticence is a cause or effect is almost irrelevant now; there are only so many of us that remember and champion THE DEVILS, and our numbers are dwindling to the point where there aren't enough of us to light a fire under the water tower to require quenching.

And if you look at all the themes of THE DEVILS - corrupt alliances of church and state, guilty-until-proven-innocent posturing, sexual frustration channeled into persecution of convenient "others" - it's really uncannily timely for today. Dare I say it, we need THE DEVILS more than ever. It's gory, it's grimly funny, and gorgeous to look at, even in the ugliest moments. So if any of what I've said has enticed you, take a step forward. Find a copy of the movie however you can. If you are lucky enough that a screening takes place near you (such as the four promised by Lincoln Center later this July), go see it, and drag your friends along. If you are on a movie message board, see if there are threads about it, talk it up. And if you're inclined, write a polite, supportive, and energetic email to WB's home video department pledging your dollars to a proper DVD release.

For that matter, if there are any studio flacks reading this, throw Ken a bone (preferably not Father Grandier's). Give him a SyFy original, an episode of "DEXTER." He'll work cheap, I've seen the proof. If Michael Bay can be allowed his coked-out no-shot-less-than-three-seconds bullshit, there oughta be room for Ken Russell to work again in this town.
Posted by Marc Edward Heuck at 5:00 AM